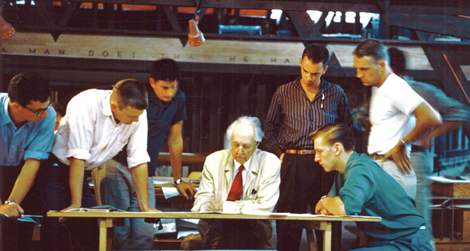 They Come from Egypt, Italy, New England
Kamal Amin was at the University of Cairo in Egypt when he read one of Wright’s books. “I was astounded by the work,” he says from his Phoenix home. “I knew then that my destiny was connected with Mr. Wright’s.”

In 1951, he wrote to Wright, who responded with an invitation to visit him in Arizona where he remained an apprentice until Wright’s death; he stayed with the Fellowship until 1977, when he set up his practice in Phoenix. “Mr. Wright was the greatest influence in my life,” Amin says. “To this day, I am filled with joy that I walked the same earth and breathed the same air as him. He was the last of the founding fathers; he planted self-identity for this country’s architecture and gave all of us permission to explore everything.”

Bruce Brooks Pfeiffer enjoyed 10 “exhilarating and inspiring” years with Wright, 1949 to 1959. “To watch him at the drawing board pour forth one remarkable idea after another was a rare treat for a young apprentice,” says Pfeiffer, who became the archivist of his work and art collections. “He seemed possessed of a sense of youth and excitement
that was timeless.”

About the same time, in 1952, New Englander Arnold Roy joined the Fellowship. He welcomed the opportunity of living in a tent at Taliesin West while designing a more-
permanent structure for living—a standard rite of passage at the school.  “One of the reasons you came here was to get your hands dirty,” Roy says. “Mr. Wright also knew that if you were going to build shelters for a living, the best way was to experience living in one on site. Your experience at Taliesin West was a microcosm of your life as an architect.”

For Roy, as with Brierly and the other apprentices, Wright’s teaching begins with understanding the place where you are building. Wright called this organic architecture—a foundation of today’s sustainable or “green” design.

Celebrating the desert by using on-site materials, working with the climate, daylighting, sun-protective overhangs, building for people’s needs with elegance and efficiency: These and other principles of design make him a “green” visionary and a teacher of generations of architects, including those he did not teach directly.

Even those he taught but who took a separate path acknowledge the influence. Soleri spent 18 months with Wright in 1947 and 1948, after completing studies for his Ph.D. of architecture at Politecnico di Torino. “Mr. Wright and I were of different generations and came from different places,” says Soleri, 93, author of 20 books, superlative bridge designer and creator of the Arcosanti Urban Laboratory at Cordes Junction 60 miles north of Phoenix.