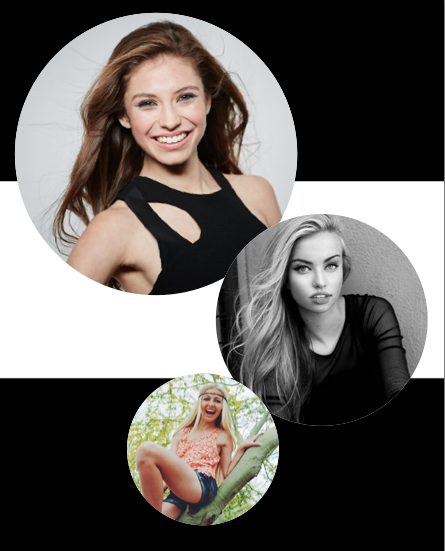 After weeks of casting calls, online voting and meetings with local fashion and modeling experts, Arizona Foothills Magazine has announced its annual Face of Foothills winners. Meet the three lovely ladies who are proving—that with passions like photography, academics, philanthropy and sports—they are more than just a couple of pretty faces.

Since Danielle Medrano was little, her parents have taught her two core life values: to use her talents to benefit others and to never give up on her dreams. And that’s exactly what the 20-year-old sophomore at Arizona State University is doing. She’s not only this year’s Face of Foothills, but she’s also studying psychology and is working on adding a music therapy degree. She hopes to one day be a clinical child psychologist.

Medrano, who was raised in Tucson but now lives in Phoenix, has always had a heart to perform for others. She started dancing when she was two, acting at eight, singing at 10 and acting in film at 13. Once she started working in film, her modeling career naturally took off. At 14, she signed with Dani’s Agency.

Two years ago, Medrano competed in the Future Face of Foothills, landed in the top 10 but didn’t win. That didn’t get her down. So she tried again—and her perseverance certainly paid off. “When they said my name, it kind of hit me like a bus,” she says. “Now that I’ve really just let it sink in, I am truly looking forward to being able to highlight what it means to be the Face of Foothills.”

In her free time, she continues to give back. She’s an officer for ASU’s music therapy student organization and enjoys volunteering, especially with individuals with autism. And without support from 500-plus friends and family who voted for her, she says she wouldn’t be living her dreams. “I feel incredibly blessed to know that other people in this world do still care about others.” —T.K.

Just two years into modeling, Face of Foothills Teen winner Taylor Howard, 17, already has big plans for her career. Traveling tops the list for the Arizona native. After graduation, Chandler-based Howard plans to pack her bags and head to Milan, Paris, London and more to further her modeling career. “I love to travel,” Howard says. “It should be a pretty big first experience for me.”

Since there are no guarantees with modeling, Howard wants to do as much as she can now. So far, she has been featured in magazines, on runways and even in a music video for a local singer. Despite her recent success, Howard also focuses her efforts on academics. “Everyone thinks blondes are not smart, but I am actually smart,” Howard says.

While modeling is her most favorite thing to do, Howard is also interested in photography and capturing little moments of the world around her. She especially enjoys sports photography, and a lot of her work was featured in the school newspaper and yearbook. “People would probably be surprised to find out that I know about the other side of the camera,” she says.

In the future, Howard plans to attend Arizona State University to study business. For now, however, she is enjoying life as a model. “I want to do this while I’m young and experience everything while I can.” —S.A.

A fashionista in the making, Face of Foothills Junior winner Sydney Prestia is a typical 14-year-old who enjoys fashion and dressing up with her friends in Gilbert. “I like to model because I usually hang out with my friends and do photography, and I just love taking pictures,” Prestia says.

Her favorite thing about fashion is how the colors and clothes come together to make a stylish outfit. Her go-to look is combat boots with frilly socks, a skater skirt and a long-sleeve shirt. “I just like the final product of getting dressed up...how it all comes together is really perfect,” Prestia says.

At the right place at the right time, Prestia came across a Face of Foothills casting call during a visit to the mall and thought it would be a fun, once-in-a-lifetime opportunity to try out. Little did she know she would become the Face of Foothills Junior winner with the help of her friends and family who diligently voted for her.

With her love of fashion and lovely long hair, Prestia says most people assume she is a model or cheerleader. What they don’t know, however, is that she also loves playing soccer. Prestia says she turns to the sport as a stress-reliever and as a way to spend time with her closest friends. “Whenever I play, it is just really fun and I love it,” Prestia says.

Rather than choosing between her two loves, fashion and soccer, Prestia says she just wants to see where both take her. —S.A.