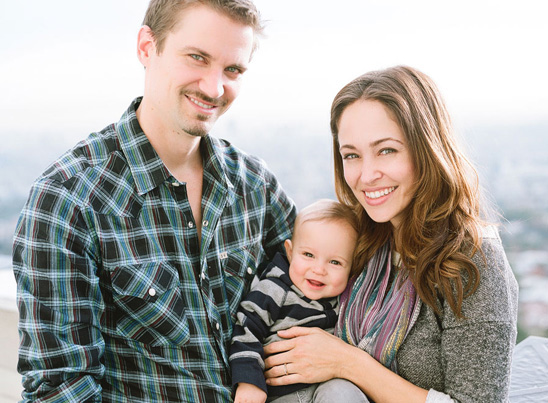 "Entourage" actress Autumn Reeser just filed for divorce from her husband Jesse Warren Strutzel. Their short 5-year marriage, but long in the eyes of the Hollywood, is ending quite tamely due to "irreconcilable differences." Not exactly an odd citing there.

However, the couple has two young sons. Reeser has asked for joint legal and physical custody. Reeser states that she does not want to pay Strutzel any type of spousal support. Reeser is on-the-map due to her role in Entourage and her former roles in The O.C. and Hawaii 5-0. Strutzel, with a much and less garnished resume, quite obviously does not have the same type of income as Reeser.

We touched base with Kaine Fisher, local attorney and Chairman of the Family Law Department at Rose Law Group, and asked him to weigh in on high profile celebrity divorce situation that we see quite frequently in the Hollywood relationship realm: Irreconcilable differences.

“Irreconcilable differences. You see, this term often used in the media to describe the reason for a couple’s divorce. But what does it even mean? I happen to practice law in a jurisdiction where this is the standard to get a divorce. Arizona is a “no fault” divorce state. In other words, you really don’t have to prove anything to be on your way.

There are no juries to decide whether your spouse slept with the neighbor, whether there was domestic violence in the relationship, whether a spouse does not have the ability to have sex, and yes even homosexuality in some states. It’s as easy as waking up one day and deciding that it’s over. Strong proponents of family values don’t like this standard. They think it makes getting a divorce too easy.

On the other hand, I tend to think that it prevents turning the courtroom into a circus. I take pride in ensuring my clients divorce gracefully, which would be hard if I had to resort to mudslinging to even get a divorce. This is likely the reason many states have moved in this direction over the past several years. Sometimes it’s just over. There really doesn’t have to be a specific reason. Some couples grow apart. Some just don’t get along anymore. It sounds like Autumn Reeser just had enough and wants to move on.

The unfortunate dynamic here is that Reeser and Strutzel have two small children. I can assure you that the reason for the couple’s divorce will have no bearing on how the court is going to decide issues of legal and physical custody. The fact the parties no longer want to be married really doesn’t play into whether they are fit parents.  In Arizona, the terms “legal custody” and “physical custody” no longer exist. These concepts are now referred to as legal decision-making and parenting time. The former pertains to who makes major life decisions for the children. The latter refers to how much time the children spend with each parent.

As always, the court will look to what is in the children’s best interest when deciding both issues. It sounds like Reeser is willing to be fair on these issues, which should give Strutzel a sense of relief. Trust me, thousands of dollars can be spent litigating these issues when there is a disagreement. My guess is that Reeser has far superior financial means and I would worry about whether Strutzel has the firepower from a financial standpoint to defend himself. It’s hard to tell at this point whether either party has raised fitness issues, but based on the fact Reeser has alleged the parties should have equal parenting time and joint legal decision-making, I sincerely doubt there are any. It is the children who suffer from long, drawn-out custody battles. They will be thankful when they are older if their parents can work through these issues amicably.

Often the parenting time situation is in flux after the parties separate until the court can weigh in on what the schedule should be on a final basis.  When parents can’t agree on what should happen while waiting for a Trial date they must often resort to asking the Judge for temporary relief.  I don’t see this has happened in this case so my guess is that the parties have come to some sort of temporary solution.  This is a good sign.  It means they are working together on most everything.  I say “most everything” because clearly there is a disagreement about child alimony.  Reeser doesn’t want to pay anything although I have a hunch she may be obligated to.  I don’t know much about the parties’ finances.  But depending on the disparity in their incomes, and consideration of other factors such as the standard of living, etc., Reeser may be on the hook for paying at least some amount of maintenance to Strutzel.   Their marriage is relatively short so I doubt Reeser will be exposed to making payments long-term, but she may have to fork out something.   I would not be surprised if there is a lump sum settlement as this is often the case with celebrity divorces.  When you have enough liquid funds sometimes it’s quicker and easier to just pay your spouse a lump sum and get it over with.  I often hear my clients complain about how painful it is to write a check to their ex-spouse every month.  With regard to child support, a resolution of this issue is typically cut and dry.  We use the Arizona Child Support Guidelines in Arizona.  Basically, you plug in the required figures, out comes a number, and that is the number the court orders.  Obviously the lawyers fight about what those numbers should be, and sometimes there is a discussion about an upward deviation from the Guidelines in high net worth cases such as this, but generally a party will be required to pay support if the Guidelines say they should."