Arrowheart to Perform at Women Who Move the Valley Brunch

Phoenix girl's group Arrowheart will perform at Arizona Foothills' fourth-annual Women Who Move the Valley Brunch. The foursome, who has recently gotten airtime on KNIX, performed the national anthem at Phoenix Suns games and at the Fiesta Bowl Block Party on New Year's Eve in Tempe, will be showcasing their softer side during a short mingling time at the brunch.

The event honors the ten ladies featured in the January issue of Arizona Foothills.

Lyle and Missy Anderson are to host the 18th Annual Wishes for Wildlife 2011 Benefit Event April 30. Nearly 63,500 native species have been assisted by Liberty Wildlife over the past 30 years.

The event will take place at the beautiful Scottsdale Fairmont Resort, and will include cocktails, appetizers and a first-class silent auction. For more information, dial 480.998.5284.

Grimaldi's Pizzeria is now open in Scottsdale Quarter! Grimaldi’s serves award-winning, hand-tossed, coal-fired brick oven pizzas, calzones and house made salads and desserts. With Frank Sinatra crooning in the background and the tantalizing aromas of over 100 years of pizza-making tradition in the air, Grimaldi’s combines classic pizzeria charm with a modern, stylish, loft-like atmosphere. This location serves as their sixth in the valley and already construction has started on a seventh at Ray Rd and the I-10. 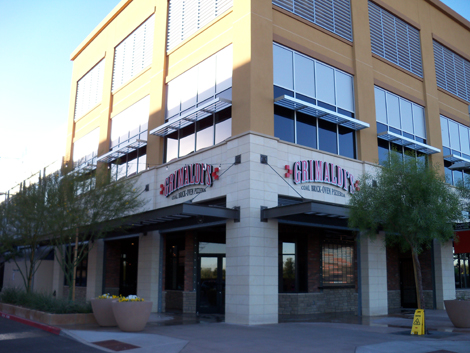 Oakville Grocery to Close, be Replaced with Javiers Mexican Restaurant

We hear Oakville Grocery at Scottsdale Quarter is shutting its doors and will soon be replaced with trendy Mexican restaurant Javiers.

Apparently shoppers are dropping so much cash at the new H&M and Apple store that expensive groceries are now lower on the list of priorities.

*This information comes from an unnamed source.

Shots were fired January 5 at Chandler Fashion Center near Sears. According to Chandler Police, an armed robbery occurred off the premises, the robber then entered the Fashion Center at approximately 12 p.m, and was followed by and confronted by undercover police. The suspect fired shots at the undercover officers, not knowing they were policemen. It is unclear as to whether anybody was struck in the shooting.

The center is currently under lockdown-shoppers have been evacuated as the police searched for the gunman.

The robber was said to be a fugitive who was recently and mistakenly allowed to make a $320 bond and was released from jail.