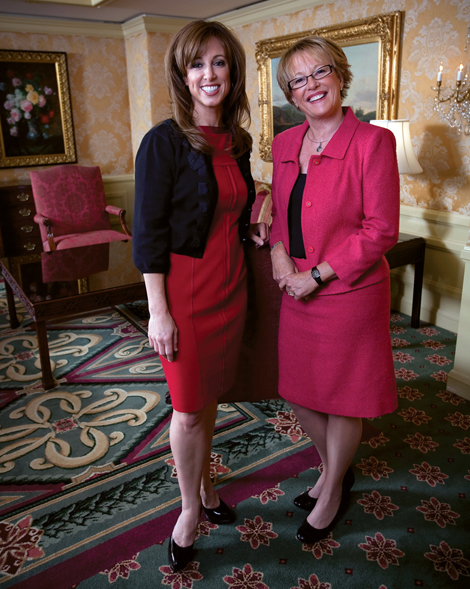 A company car and travel opportunities are nothing compared to Julia Baker’s favorite career perk. “I love being allowed to eat chocolate every day—it’s part of my job description,” she says. “If I want dessert at 10 in the morning, nobody gives me a second look.” You see, Baker is the founder, head chef and CEO of Julia Baker Confections. She fashions some of the Valley’s most memorable custom wedding cakes and is known for her to-die-for caramel truffles.

Though she’s always enjoyed baking and has had a sweet tooth since birth—her last name is Baker—her talent for mathematics led her to a career as a statistician, a job that allowed plenty of travel and plenty of dining out. After sampling such high-end fare (“I really continued to love the cooking aspect,” she says), Baker decided to pursue her passion for desserts and ended up graduating first in her class from Le Cordon Bleu Paris in 2002. Two years later, Julia Baker Confections was born in Scottsdale.

As a business owner, Baker’s number-crunching capabilities still come in handy. “I love being able to be the serious spreadsheet studier that I was before,” she says. “And I love being able to escape in the kitchen and create memorable works of art.” Works of art that have, in fact, been sampled by many famous faces including Bono, Britney Spears, Alicia Keys and Jennifer Aniston. One of her biggest successes, Baker says, is “to have people outside out of Arizona know who I am.”

With truffles and ganache being part of her daily dietary intake, Baker definitely makes time in her busy schedule for her other passion: triathlons. She says she bikes, swims or runs every single day. Baker isn’t only ambitious when it comes to her athletic endeavors. “I would love to become the next Godiva,” says Baker, whose chocolates are available in high-end boutiques and via her Web site, www.juliabakerconfections.com. “I would love for Julia Baker Confections to be a household name. I don’t want to be too mass where the quality is affected. I want people throughout the United States to know what fresh, good chocolate tastes like. [People] stick with what their childhood favorite was and don’t branch out and experience what Europeans created chocolate to be.” —M.L.

Pam Gaber, a self-proclaimed “corporate refugee,” has always loved animals, especially dogs. In 2000, her sincere adoration of animals and passion for helping others grew into Gabriel’s Angels, a local program that delivers pet therapy to abused, at-risk children.

Gaber, who was volunteering at Crisis Nursery Center in Phoenix in 1999, asked if she could bring Gabriel, her Weimaraner puppy, dressed as Rudolph the Red-Nosed Reindeer to the annual Christmas party. Gaber had told a variety of exciting stories to the kids at the center about her lovable puppy and thought they would enjoy finally meeting him. The impact that her festively dressed dog had on the children and their behavior was something she could have never imagined.

“We all were just shocked and the only difference was really the presence of this gentle gray dog,” Gaber says. “The kids would hug him and love him.” Gaber realized the significance of Gabriel’s influence on the kids that day and decided to do something productive and beneficial for the at-risk children in the community. Gabriel’s Angels, named after her beloved Gabriel, was formed by Gaber in May 2000 and officially began pet therapy sessions in August of that same year, and was granted nonprofit status in January of 2001. Gaber left her full-time job working for Sandoz Pharmaceutical, in the Animal Health Division, to begin Gabriel’s Angels.

Due to the support Gaber receives from members of the community, Gabriel’s Angels has been able to expand to 120 agencies throughout Maricopa County as well as Tucson. The organization currently has 132 dogs and 132 human volunteers. The therapy dogs visit children at a variety of locations across the Valley, including Sojourner Center, Crisis Nursery, Sunshine Group Homes and Homeward Bound, to name a few. “I believe that Gabriel has inspired many hundreds of people to volunteer in an arena called child welfare that they would’ve never volunteered in if they couldn’t with their dog,” Gaber says. “So, I’m most proud of offering an entirely different volunteer experience for people and their dogs.”

Gabriel, who was recently diagnosed with a sarcoma tumor on his front leg, is still working at Crisis Nursery Center every other week. The 11-year-old Weimaraner is undergoing chemotherapy. Gaber says that he still enjoys visiting the kids: “He’s worked all of his life; I don’t think he would know what it’s like to not work.” Besides Gabriel’s Angels, Gaber enjoys hiking with her husband and doing Pilates. —C.A.