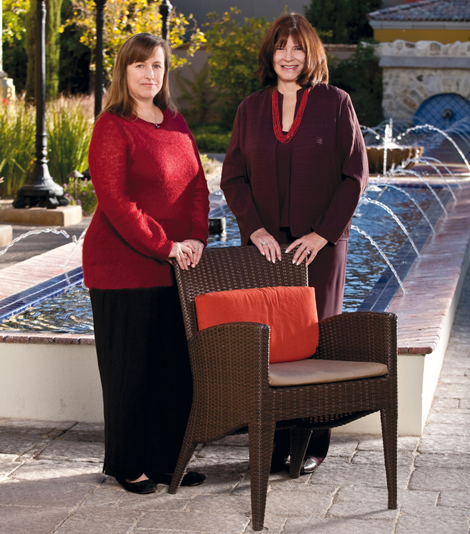 Tracy Dempsey
Pastry chef at Crudo and The House at Secret Garden and founder of Tracy Dempsey Originals
Tracy Dempsey’s girlhood memories have more to do with dough than dolls. “My first memory is taking leftover crepe batter that my mom had made and making crepes,” says the celebrated pastry chef. Instead of diving directly into the baking world as an adult, Dempsey was first an instructor at Arizona State University, teaching English as a second language. “I found that my weekends were spent dreaming up things to make,” Dempsey says. “I was so into entertaining and planning big menus that grading papers was really getting in the way.” So while in her 30’s, Dempsey enrolled in the culinary program at Scottsdale Community College, with her big break happening in 1999 when she was hired as a baker at Marriott Mountain Shadows Resort.
Over the next few years, Dempsey morphed into the Valley’s first lady of pastry thanks to her inventive work (i.e., the chef’s ever-popular bacon brittle) at Lon’s at The Hermosa Inn, Restaurant Hapa and Cowboy Ciao. Today, the 16-year Valley resident dishes up incredible after-dinner eats—using local, organic ingredients, when possible—at Old Town’s Crudo, the new House at Secret Garden and via her own line of baked bliss, Tracy Dempsey Originals.
When her whisk isn’t in hand, Dempsey enjoys spending time with her husband of nearly 19 years, Chuck, as well as reading and gardening. She’s also passionate about
supporting local animal and arts organizations and nonprofits that aid women and children. For example, partial proceeds from her line’s Original Bacon Pecan Brittle benefit Cat Nip and Tuck, a group that provides spay and neuter services. Most recently, Dempsey paired with her fellow pastry pro, Kelly Garcia of Butter & Me, for the Cupcake Love-In. The event, which took place in October, not only brought the joy of cupcakes to the masses but awareness and funds to the Valley’s Safe Haven for Animals and Singleton Moms.
Though one would think that sampling sweets would be the highlight of her day, Dempsey—who’s been known to make a marshmallow out of everything from beets to rosebuds—says being a pastry chef is all about broadening people’s horizons. “I love introducing people to something new, to something different—and it’s in dessert form,” she says. “How can that be bad?” —M.L.

Dr. Letitia Chambers
President and CEO of Heard Museum
With national and international reputations, the Valley’s Heard Museum added yet another notch to its belt with the appointment of Dr. Letitia Chambers last January. Not only is Chambers the only female director since its founder Maie Bartlett Heard, but she is the first person of American Indian heritage to fill this position in the museum’s history. “My love of art and my interest and involvement over many years in American Indian issues and in the art of American Indians made this the perfect job for me,” Chambers says.
Though she grew up in Oklahoma, Chambers visited the Heard Museum as a child. She began collecting American Indian pottery, contemporary paintings and
sculptures. After earning her Ph.D., Chambers headed to Washington D.C. where she landed roles as a senior policy analyst on the senate budget committee, a staff director of the United States Senate Committee on Labor and Human Resources and a lead role as the ambassador to the United Nations General Assembly, to name a few of her previous careers. Chambers lent a hand in writing major legislation, including legislation that generated funding for specific programs directed toward tribes.
One of Chambers’ most significant accomplishments was in the 1970’s when she became the first woman to head a major standing committee for the U.S. “Seeing how many more opportunities there are for women now, I feel that being a part of the generation that was able to open doors for women…was probably the thing that I did that was most important,” Chambers says. “I’ve always been motivated by trying to change things for the better.”
Further into her career, Chambers founded a policy consulting firm, Chambers Associates, Inc., which she later sold to a large globally based firm. She then moved to New Mexico—where her daughter, Melissa, currently resides—to head up the system of higher education for the state before settling in the Valley in 2010.
Although Chambers devotes most of her weekly time to her challenging position, she enjoys gardening and spending the weekends with her husband, Peter Smith. As a new addition to the Valley, Chambers hopes to educate people about its original inhabitants, the importance of people coming together and the value of being respectful of each other and of the land on which they live. —S.M.

Where are they now? “My Banner Health Foundation team and I have been laying the groundwork for a number of new initiatives that will greatly improve health care in this community. One of the most rewarding projects underway is a campaign for the new Banner MD Anderson Cancer Center opening this fall on the Banner Gateway campus. I have the pleasure of working with community volunteers who aspire to make a difference through this noble endeavor. It doesn’t get much better than that.” —Andy Kramer, 2010 honoree