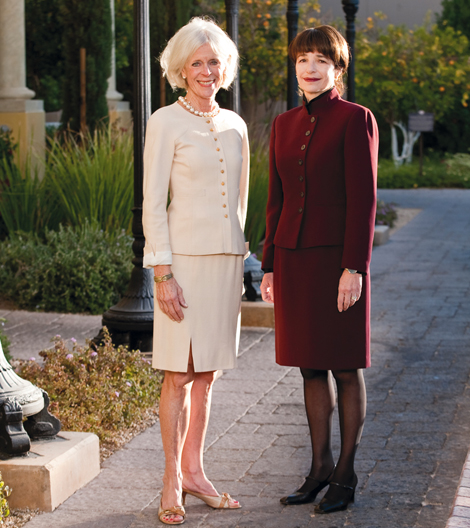 Susan Levine
Executive Director of Hospice of the Valley
Born in the Midwest, Susan Levine moved to Pennsylvania as a teen and spent most of her adult years on the East Coast. Even though her roots are far from Arizona, it only took one visit to get her hooked—and she’s lived here on and off ever since. “I was working in retail in Pittsburgh in the management training program at Gimbels department store,” she says. “And [I found out] that the first Saks, which was owned by Gimbels, was going to open on 24 Street and Camelback. So I came out to visit my grandparents
and applied and got the job the first day to be the sportswear manager.”
Levine, who briefly attended Chatham University, later returned to Philadelphia to enroll in Temple University and pursue a teaching degree. Her role as a teacher soon took her from the classroom to the hospital where she formulated a training program for nonclinical managers. While working in Abington Memorial Hospital, Levine quickly fell in love with the health care industry. After relocating back to Arizona and joining St. Luke’s Hospital, Levine enrolled at Scottsdale Community College and earned a nursing degree.
After graduating, Levine joined Hospice of the Valley and has been with the company ever since. “I wanted to do something clinical,” says the mother of three, stepmother of three and grandmother of 14. “I always stuck my nose into the clinical [side of] things and checked in on patients even though it was not my job. I was drawn to the intimacy and the importance of excellent health care, taking care of people when they are vulnerable, and doing it beautifully. Treating patients in the way they should be treated, to me, was quite a privilege.”
At 70, Levine has no desire to slow down. Married to William for eight years, she enjoys their summer weekend getaways to Coronado, Calif., their intimate dinner-and-movie dates, and the time she gets to be with her family. “[I know] I can’t work for Hospice of the Valley forever. I just hope to work until the time is right to retire and hope I have the wisdom to know when that is. After that, I hope to enjoy a long, old age and always [find a way to] make a contribution and give back.”—C.W.

Debra Friedman
Vice President and Dean of College of Public Programs at Arizona State University’s Downtown Phoenix Campus
As a leader at Arizona State University’s Downtown Phoenix Campus, Debra Friedman works to not only enhance her campus, but the entire Phoenix community. In 2005, Friedman moved to the Valley, living in the state previously while teaching at the University of Arizona, to take part in establishing the Downtown Phoenix Campus. She was drawn to the values of ASU’s president, Michael Crow, and the devotion the city demonstrated to its post-secondary education system by passing a $223 million bond to
construct the new campus. “That’s the only example in the world of a city investing at that level in its state university,” Friedman says. “I think Phoenix is an absolutely phenomenal and fascinating city.”
The College of Public Programs, of which she is the dean, was one of the first two colleges to move to Downtown Phoenix. Friedman believes the campus has the opportunity to change the relationship of the urban communities that surround it and ASU as a whole. “We have the capacity to really make a difference in people’s lives,” Friedman says.
Because of her involvement with and belief in the campus, Friedman was named vice president of the Downtown Phoenix Campus in 2008, acting as an academic advocate. That same year, the campus was awarded the C. Peter Magrath University Community Engagement Award, one of her greatest accomplishments. “It’s been one wonderful, unexpected opportunity after another,” Friedman says. In addition to her commitment to the college, Friedman holds board memberships on the Greater Phoenix Economic Council, Downtown Phoenix Partnership and the Heard Museum. She also enjoys cooking, hiking, traveling and being with her daughter, Eliana.
Looking up to the likes of Luz Sarmina of Valle del Sol, Letitia Chambers of the Heard Museum (a fellow Woman Who Moves the Valley) and Kit Danley of Neighborhood Ministries, Friedman finds that her strongest motivation is the fact that higher education transforms lives. Her love of helping others is evident in her new initiative, Spirit of Service Scholars, which brings together ASU students who want to devote themselves to public service. “I get to spend most of my time working with people who care more about others than they do about themselves,” Friedman says. “That’s a fabulous way to spend a life.” —S.M.

Where are they now? “I’ve seen Local First Arizona grow by an average of 55 new business members per month this year, have moved the small staff of three into an office, and have successfully launched a new campaign called Shift Arizona, which encourages citizens to shift 10 percent of their spending from national to locally owned establishments. I have also worked on changing procurement policies in several Valley cities and played a role in upgrading the city of Phoenix’s adaptive reuse process. I joined the team at the Discovery Triangle and continue to work on revitalizing our urban centers.” —Kimber Lanning, 2009 honoree