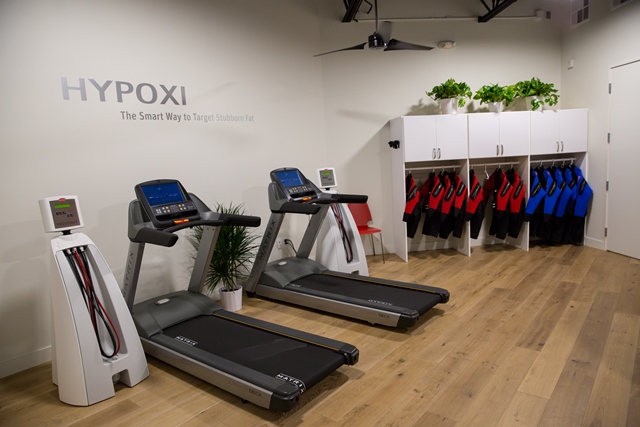 On my first visit to HYPOXI, I was introduced to the four machines that are utilized in HYPOXI studios: the Dermology, which reduces puffy skin, cellulite and uneven skin tone; the Vacunaut, which targets fat in the stomach via treadmill exercise; the S120, an enclosed stationary bike that targets fat in the lower stomach, hips, buttocks, thighs and lower back; and the L250, a lay-down stationary bike that targets the same problem areas as the S120.

In order to understand what my goals are—and, thus, what machines I would be using during my sessions—the first visit also included a consultation with my HYPOXI coach, a staff member who leads clients through the fitness journey. Body measurements were taken, as well as a 3D body scan which allows users to see a 360-degree avatar of their body (which, in itself, is a really unique experience that I haven’t seen anywhere else in the Valley). At this time, we also discussed diet and body areas that I wished to improve. Though standing in your skivvies in front of a stranger for measurements isn’t anyone’s idea of fun, the coaches at HYPOXI are warm, welcoming and eliminate any awkwardness from the situation.

My first experience with a HYPOXI machine was with the Dermology. This is the only machine that doesn’t require any exercise or effort; basically, you lie there. You can take a 20-minute nap, if you’d like. You step into a large suit (from neck to toes) before lying down and being plugged into a machine that applies negative and positive pressure. The first minute of the Dermology process was a little nerve-wracking, as it feels like being given a giant bear hug from your chin down. It is a tight squeeze. (Those with claustrophobia issues might want have a difficult time with Dermology.) However, after that first minute passed and I became used to the feeling, the sensation was much more calming, more relaxing. From then on, I looked forward to my thrice weekly Dermology sessions. I mean, where else are you basically forced to lie down, listen to spa music and relax for 20 minutes?