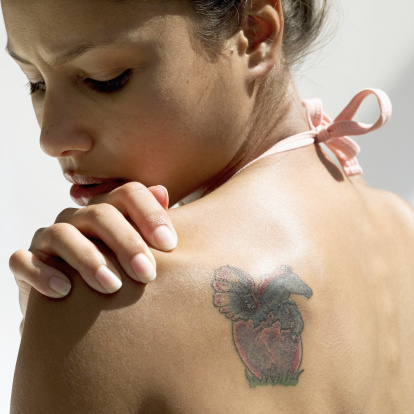 According to a study from the Patient’s Guide, tattoo removal is quickly becoming one of the more popular dermatology procedures, soaring 32 percent over the past two years. Unfortunately, though Phoenix Skin Medical Surgical Group has been performing tattoo removal for 20 years, the past procedures required 10 to 12 treatments for black ink and over 20 for colored. Even worse, the current technology takes years to complete, forcing patients to wait 6-8 weeks between each treatment. The revolutionary Picosure procedure reduces the amount of treatments and the amount of time between treatments, making erasing tattoos faster than ever before.

But, does it really work that well? According to a study, in which 22 subjects received the treatment, it does. In this study, these subjects with multicolored and recalcitrant tattoos were treated with Picosure over a two week period, resulting in 80% overall tattoo clearance. Furthermore, the average subject received 94% clearance for blue and green ink, demonstrating unmitigated success.

The Cynosure President and CEO Michael Davin argues that “FDA clearance of PicoSure is a major milestone that caps nearly a decade of research and development at Cynosure to commercialize the world’s first safe and effective picosecond aesthetic laser”. It “accomplishes this by delivering short-pulse bursts of energy to the skin in trillionths of a second” and was created because “20 percent of the 45 million Americans with at least one tattoo want to have it removed” allowing companies to reach, and treat “a large and vastly underserved market”.

On top of this, by using a “shorter pulse duration “ that “erases tattoo pigment more efficiently”, a higher level of patient satisfaction and “improved results compared to the current technology” is achieved, all while “more effectively targeting blue and green pigment which is typically difficult to remove”, all according to Dr. Lee Laris of Phoenix Skin Medical Surgical Group.

With all this, the PicoSure laser allows tattoos to be treated within three to four weeks intervals, once more dramatically decreasing the time of healing and treatment (with most tattoos disappearing with three to six treatments). Furthermore, the procedure allows for patient comfort, as the procedure is performed in the outpatient setting while only taking a few short minutes. Pain is mild, with most of the pain being numbed by a local anesthetic, and prices vary depending on the tattoo’s extremity.

Doubtlessly, the PicoSure laser allows patients to see an end to their suffering, while finally giving them a way to erase their tattoo with little to no difficulty. It is certainly a light at the end of the tunnel.

Using only the latest technologies and the most effective treatments, Dr. Laris and his team of providers provide patients with a cosmetic experience that not only enhances appearance and improves self-image, but does so in a safe, non-invasive way. He has also been operating in Arizona since 1992.