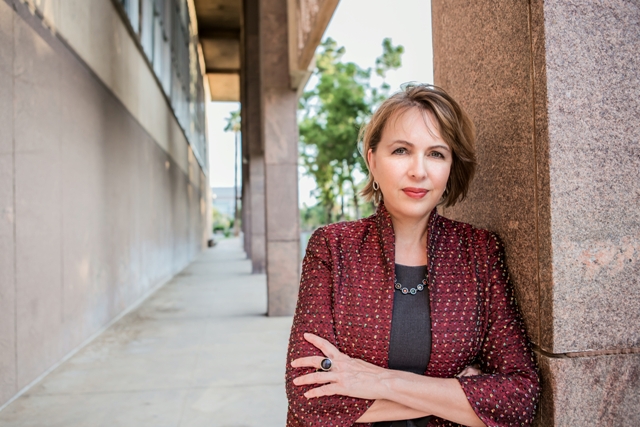 The goal of Central Arizona Shelter Services (CASS), the longest-serving and largest emergency homeless shelter in Arizona, is to end homelessness one life at a time. This noble mission and the nonprofit's success is in great part thanks to its CEO, Lisa Glow. Here, get to know Glow and her hopes for the future of CASS, including a new shelter for local seniors.

Being a mom is my most meaningful and favorite hat. After that, being a humanitarian is the most important hat I wear. I believe that we are most fully alive and in our highest state of personal contribution when we find our passion and how we can make a difference in the world. We also teach our children to be better humans when we do work that matters to us personally. It was my law degree, however, that gave me the training and the foundation to have been able to do so many different things with my life, including working in the political sector with former Governor Janet Napolitano, understanding how to apply Socratic learning to challenge assumptions and listen deeply for the best solutions, and how to build community and consensus. In that sense, becoming a lawyer was the most important career decision I made with my life.

CASS has been Arizona’s greatest safety net for people experiencing homelessness for 35 years and helped hundreds of thousands of men, women and families transform their lives and permanently end their homelessness. Our basic services include temporary, safe emergency shelter, as well as helping people get back into housing, find jobs, obtain benefits, get reconnected with family and more. Our adult shelter has 470 beds and our family shelter 120 beds. We are at 100-percent capacity year round, and the demand for shelter has risen dramatically in the last year. The CASS staff are the most compassionate people I have ever had the privilege of working alongside.

Last year, we served nearly 5,000 people and 1,200 moved into permanent housing, a success of which we are very proud.

We served 550 homeless veterans, nearly 400 youth (some who had aged out of foster care), over 700 family members and nearly 1,200 senior citizens. Yet, because of the growing need, we are turning hundreds of people away from shelter. We believe the time has come to build another emergency shelter in our community, potentially one just for seniors 62 and older. Seniors are the fastest growing homeless demographic because many are on fixed incomes and often just one paycheck or medical crisis away from becoming homeless. Worst yet, with rising rents, we are seeing dozens of seniors being evicted and no longer able to afford housing anywhere. We are in a serious silver tsunami of homelessness, and we must interrupt it with meaningful action. We are also committed to destigmatizing homelessness, leading to greater understanding and greater public action.  The vast majority of people who are becoming homeless are facing economic crisis in their lives and need a simple hand up.

The CASS Board of Directors recruited me for the position. After having proven myself in many different domains through my career, and building my skills in fundraising, public policy reform, law and public sector and nonprofit management, I could not have dreamed of a more perfect job where I can help make a lasting impact for others. A significant aspect of the job is to work in collaboration and partnership with other agencies and the community, something that I love to do. In fact, I don’t think we can solve our complex issues unless we all work together. In this job, there is never a day that I am bored--the challenges are simply too large.

CASS is an Arizona Charitable Tax Credit agency and you can give to CASS and get a credit against your AZ taxes. In other words, you get it all back and you get to direct to an eligible charity of your choice-- CASS is one of those charities. The maximum for a married couple is $800 and $400 for individuals. The AZ Charitable Tax Credit is in addition to the school and foster care tax credits.

We are also recruiting ambassadors to help us raise awareness, raise resources (both financial and donated goods) and to be a voice of possibility for the change we need. Go to www.cassaz.org to become an ambassador.

And we need people to follow us on social media to spread awareness of how they can help and put a face of humanity on homelessness by sharing stories.

Yes, there are a few easy ways to help during the holidays.

(1) Become a Champion for CASS with an annual donation of $1,600 or higher to our giving circle.

The number of people who are homeless is the highest it’s ever been in the Phoenix metropolitan area, with a 149 percent increase in the unsheltered population since 2014.  The homeless crisis impacting all of us, our neighborhoods, our cities, and most importantly, those who are becoming homeless. The truth about homelessness is that four of five Americans live paycheck to paycheck.  And we are in a serious affordable housing crisis that is driving hundreds of hard working people to become homeless. This includes a growing senior population of those 55 and older, our fastest growing demographic, who are being evicted in record numbers and whose fixed income cannot keep up with rising rents. This silver tsunami is a travesty and over 31% of people staying in our shelter are seniors, many in their 70’s and even as old as 89. We also want people to know that no one really chooses to be homeless. There is always something that happens first. Veterans who have PTSD are at greater risk of homelessness, youth aging out of the foster care system are at risk as there is simply not a safety net for them, women fleeing domestic abuse, and so on. And there is no city in the country where a person working full time and making minimum wage can afford a two-bedroom apartment. One financial or medical crisis, and they become homeless.

Working with Napolitano was the greatest professional experience of my life. I took a leave of absence from a lucrative law practice to become her fundraiser in her 1998 race for Arizona Attorney General. I took this chance because I felt that she was going to do great things for our state; and, I loved the possibility of getting to be a part of that. I then worked for seven years on her executive staff as a legal and policy advisor on a broad range of issues impacting mostly children, women and the disenfranchised. It was the best, most impactful work of my life.

The book I am writing is about Janet’s legacy for Arizona; how she won as a pro-choice democrat in a red state; and the many barriers she broke for women. She was Arizona’s first female Attorney General, the first woman to be elected Arizona Governor in her own right, the first female to head the United States Department of Homeland Security, and the first woman to run the 30-billion-dollar University of California System. What is so unique about her is that she broke barrier after barrier for women, and she did it her way, as a single woman committed to also living a great life.  She has climbed the Himalayas, rafted rivers all over the world, argued in the USSC and in The Hague, represented Anita Hill, and made big impact for people in every job she has had.

My personal goals for the coming year are to see my second child successfully off to college and to finish my book. And to take a trip down the Grand Canyon.

My professional goals include expanding CASS’ reach as a regional solution to homelessness, possibly opening another shelter that would serve the growing  senior population. Currently, we turn away nearly 300 people a month who are seeking emergency shelter--clearly there is a need for more emergency shelter beds. Another goal is to influence an advocacy agenda that can start to stem the tide of homelessness. We must get the attention of our policy makers and community leaders and address the fact that there is simply not enough affordable housing in our state.  Failure to have this long term vision puts us at risk of becoming like Los Angeles, Seattle or San Francisco, where the homeless crisis has reached epic proportions.