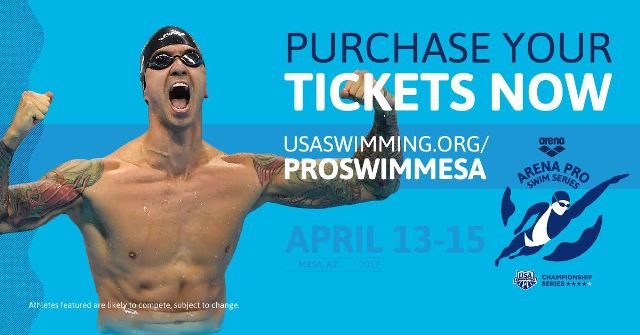 The three-day meet opens Thursday, April 13 and continues through Saturday, April 15, with daily prelims at 9 a.m. PT followed by finals at 5 p.m. Single- and all-session tickets are on sale now online. Two days of television coverage from Mesa will air on delay on NBC Sports Network – Friday, April 14, and Saturday, April 15, at 1 a.m. ET. All three finals sessions also will be streamed live via NBC Sports, while a live webcast of the entire meet also will be available at usaswimming.org. In total, approximately 500 swimmers will swim in Mesa, including 40-plus members of the USA Swimming National Team and more than 20 U.S. Olympians.

On the local front, Mesa native and 2012 Olympian Breeja Larson is expected to compete, as are a number of standout area age-groupers. This event is the third of five stops of the 2017 arena Pro Swim Series. Japan’s Daiya Seto and U.S. Olympian Melanie Margalis (Clearwater, Fla./St. Petersburg Aquatics) are the current series leaders with 32 and 25 points, respectively, after strong performances in Austin and Indianapolis. T

he arena Pro Swim Series scoring system awards eligible swimmers prize money and points based on first-, second- and third-place performances at each meet in the Championship final only. The prize money and scoring system is as follows: First place, $500 (five points); second place, $300 (three points) and third place, $100 (one point). At 2017 Phillips 66 Nationals, the point totals will double to 10 points for first place, six for second and two points for third place. The final series tally will be computed after the 2017 Phillips 66 National Championships, slated for June 27-July 1 in Indianapolis, and the prizes will be awarded at that time. The top eligible male and female overall point total winners in the series will earn a one-year lease of a BMW vehicle, as well as a $10,000 series bonus.