Take Two Moonstones and Call Me in the Morning

Take Two Moonstones and Call Me in the Morning 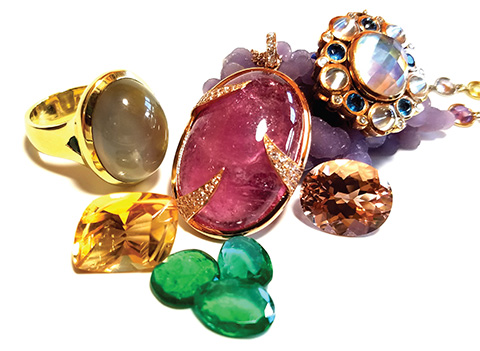 Humans have lived in awe of the earth and her treasures, so it’s little wonder that lore has been built over millennia pertaining to the healing qualities of gemstones. After all, until modern medicine, all healing elements came from nature. And what could possibly look more magical, more life-affirming, than a shimmering moonstone oran iridescent labradorite?

Because illness was often believed to be due to blockages in the body (and still is in many eastern and natural traditions), the healing powers of gemstones are often attributed to their ability to clear blockages and open energy pathways. Rose quartz is believed to heal the heart, restoring proper rhythms. Lapis and amethyst are believed to provide mental clarity. Moonstone is believed to align the systems of the body much in the same way the moon affects the tides. Each of these gemstones is believed to possess both physical and emotional curative properties.

Some gems are believed to have very specific applications. Citrine is the gem of choice when treating injuries to the eye. Fluorite is often prescribed to cure headache; bloodstone is used to relieve backache; and jasper is used to treat fatigue. Emerald has been used as an all-purpose treatment for lungs, heart, liver, gallbladder, spleen and spine maladies.

And who is to say these healing properties are simply figments of the imagination? Given how fervently pharmaceutical companies are mining the wisdom of herbal lore for the next big cure, we may easily believe our ancestors were onto something with minerals as well.