Q&A with Alabaster the Elf of the North Pole Experience 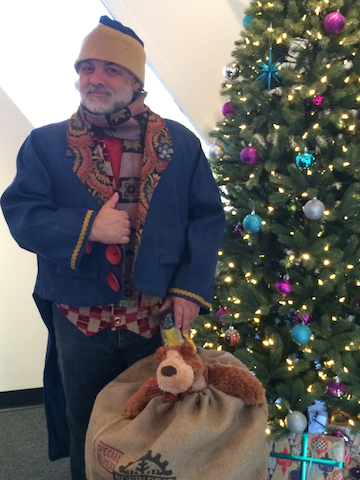 AFM: What is the North Pole Experience?

AS: They can expect the Christmas experience of a lifetime. It’s a 12,000-sq.-ft. interactive workshop, where children and their families come in to work alongside elves to help assemble toys. They get a chance to see Santa’s toy hall of fame, a lot of toys throughout history that Santa is especially proud of. There are also other activities like Santa’s bakery. And elves make candy canes. Children and guests have the chance to attend Elf University, which is a class where we teach life values like doing homework and working hard, working with others, respecting your parents. A lot of kids have probably already written or texted or “Facebooked” Santa, but we give them an opportunity to write their letter to Santa (in the mail room). After a few more activities they have the chance to see Santa’s 400-year-old sleigh. It’s pretty impressive. They also have personal time with Santa.

AFM: How long does it take to go through the experience? How do you get to the workshop?

AS: It takes about an hour and a half to go through once you walk in the door.  The shuttles, which travel through the portal to the North Pole, emanate from the Little America (NPX Trolley Station) in Flagstaff, which is where you start and return back to after the experience. The experience is not only set up for children, but for parents as well.

AFM: How did you become Santa’s head elf?

AFM: What is Santa really like as a boss?

AS: Santa is an awesome boss. He is the boss everybody wishes they had. He’s jolly and he’s merry, but he’s stern when he has to be because we only have one year to make all the toys we need for Christmas. We’re under deadline, but he does want to foster an environment in the North Pole where the elves become more and more educated each year and become more and more handy, useful, all of those kinds of things. And he rewards us graciously with candy canes and syrup and any kind of candy you can imagine. But mostly we’re rewarded with all the kids who come to visit us each year.

AS: It’s sounds really cliché, but I would like for children to perhaps get what it is they need in their lives to empower them. Not necessarily just the things they see that they think (they need) like the bubbles, the lights and all that. We have so many children that actually travel to the North Pole and they write their letters to Santa while they’re there. And the smallest children can have the biggest hearts.  We get children who write letters to Santa who are thankful for him finding a job for their dad or for keeping their family together. I would just want for every child’s wish to come true this season.

AS: All the Christmases are special to me. More recently, I just found out that there are actually children that travel to the North Pole to see me. They do come to see Santa Claus, but it makes me feel very humble to be in that position and have that responsibility.

For more information on the North Pole Experience, visit http://northpoleexperience.com/.