Apr. 3, 2014. Audi North Scottsdale hosted an epic launch party at the Westin Kierland Resort in honor of the all-new 2015 Audi 3 unveiling. VIPs and the Arizona Foothills Magazine guests were greeted with champagne, signature cocktails and hor d'oeuvres, while a display of Audis lined the walkway along with live circus-like performers. In addition, fun festivities such as interactive photo booth, professionals demonstrated on the Kierland FlowRider, and appearances from the Face of Foothills 2014 models. 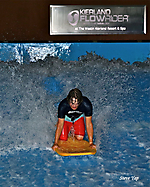