Here’s the low down on an emerging Arizona talent who tackled his dreams head on! 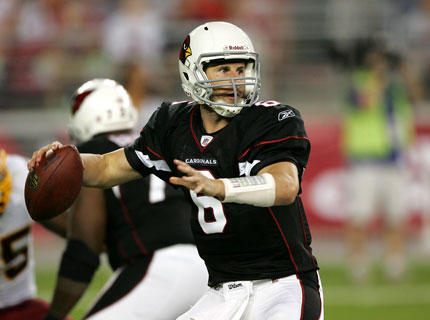 Lately, Max Hall, has become the new buzzword in the realm of Arizona’s football scene. His outstanding performance in the Arizona Cardinals preseason finale against the Washington Redskins definitely played a part. Best of all, his journey began right here, in Mesa, Arizona.

Max Hall was recently upgraded from undrafted rookie to backup quarterback. Arizona Cardinals Coach Ken Whisenhunt recently announced Max Hall as Derek Anderson’s official backup for the upcoming season and is optimistic about his future with the Cardinals. Fans at the University of Phoenix Stadium roared with support last Thursday evening as Max Hall completed 7-of-9 for 126 yards passing and a rushing touchdown to finish off the last game of the preseason with flying colors. His dedication to the team was palpable, even in the nosebleeds. The Cardinals won 20-10 with a 3-1 preseason record.

The 24-year-old is Arizona talent at its best. Hall's success began at Mesa’s Mountain View High School in 2002 where as a junior, he shined as the starting quarterback. As if leading the team to a state championship that season wasn’t enough, he earned the title of MVP. As a senior, he led Mountain View to a state-game appearance and earned the title All-Arizona Quarterback by The Arizona Republic and the Offensive Player of the Year for 5A teams by the East Valley Tribune, among other honors.

Hall’s journey led him to Brigham Young University where he eventually became the Cougar’s starting quarterback. His skills became evident when he set the school record for most wins by a starting quarterback. He also earned Sports Illustrated All-American honorable mention and many other titles as his football career at BYU flourished.

After an extraordinary run at BYU, Hall returned to his hometown and became a Cardinal’s free agent, which soon progressed into backup quarterback.

It’s a no brainer to say that Hall has football running through his veins. Maybe he owes that to his uncle, Danny White and grandfather, Wilford White, who are not only former NFL players, but ASU Hall-of-Famers as well. Being compared to former Cardinal’s quarterback, Kurt Warner, can’t hurt either.

Leadership, check! Confidence, check! Ready to back his hometown, check! It seems Max Hall has a reputation for success and is ready to prove it again this season. It’s always uplifting to see talented locals represent Arizona, and Max Hall is no different. Game 1 of the regular season is on Sunday, Sept. 9 at St. Louis.