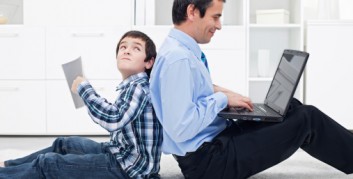 Let's hear it for the dads. Truth is, they sometimes get the short end of the stick. I admit- even I'm consumed with being a mom that I sometimes dismiss my amazing, incredible, and overly capable counterpart.

So as Father's Day approaches, I thought it would be cool to highlight some really cool dadpreneurs. These fathers have been overly successful at making their bright ideas a thriving businesses. Prepare to be inspired.

As a father of four, Sumroy found it difficult to travel with booster seats. His kids were often forced to sit without child seat protection, risking their safety. And so he dreamt up mifold, an advanced, compact, and portable child car safety seat. Ten times smaller than a regular booster seat, mifold brings the seat belt down to the child, instead of boosting them up, like traditional booster seats. And the coolest part- it folds to fit in a back pocket! Sumroy’s solution defined a need in the parenting community; after putting mifold on Indiegogo to raise funds, the company reached their funding goal in two hours. They now have over $1.5 million, and are attracting customers worldwide. mifold.com

After struggling to find a way to cure his daughter’s bad diaper rash, Edward McCloskey was shocked by the chemicals traditional baby wipes contained. He wanted something simpler and healthier for his daughter, so he created WaterWipes, the first chemical-free baby wipe. Made with 99.9% water, and 0.1% grapefruit seed extract, WaterWipes doesn’t irritate the skin, and instead helps avoid diaper rash and other skin conditions. waterwipes.com

Concerned over the delay and the often unreliable nature of traditional smoke detectors, Marc Toland searched for another option. When he didn't find an alternative, he set out to create one. Toland founded Sooner Alarms, a company dedicated to making homes safer for families everywhere. His revolutionary invention, the PlugSafe, is a unique device that has a heat sensor as an added layer of security. Able to detect problems at the most frequent source, the electrical outlet, the PlugSafe uses wireless communication to set off the alarm and notify homeowners of the fire before it spreads further. Toland also created a system for detecting Christmas Tree fires, the TreeSafe, which quickly detects when an overly dry tree catches fire from lights. Available for pre-order. sooneralarms.com

Apprehensive about outdoor light cords and plugs getting wet, Nooner sought to create a makeshift cover. From this idea, Twist and Seal was born. Made in the USA and available in a variety of sizes, the Twist and Seal durable and patented design provides protection from rain and snow. The unique design has taken the U.S. by storm and is available at Lowe’s, Home Depot, and other hardware stores nationwide. twistandseal.com

Robert Lupton founded Life Saver Pool Fence in 1987. Troubled by the number of child drownings and the lack of pool fences, Lupton set out to make pools safer. Now run by his son Eric, Life Saver Pool Fence is the number one pool fence company in the world. The company is dedicated to keeping families safe and uses only the strongest and most durable materials. As a bonus- every time a fence is bought, another pool fence is provided for free to the family of a drowning or near-drowning victim. poolfence.com

Wanting to give his kids, nieces and nephews stock in their favorite brands, Avi Lele found it was an expensive and difficult hassle. His frustration turned into inspiration, which led to him launching Stockpile, the first-ever gift card for stock. As simple as traditional gift cards, consumers can purchase Stockpile cards at grocery and retail stores. The gift cards come in a variety of denominations that make it easy and affordable to buy stock for anyone. Stockpile has made a long-lasting financial solution more easily accessible, and Lele has created a unique way to get kids interested in the stock market. stockpile.com