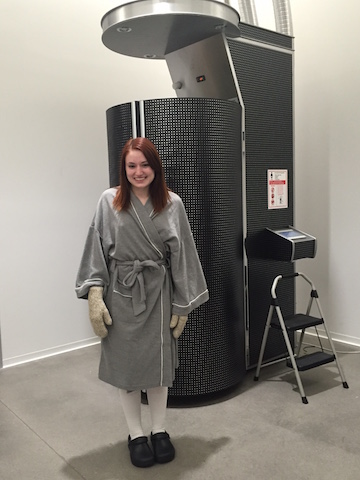 During my preview of CERULEAN, I was able to test several of their modalities, starting with the Whole Body Cryotherapy. This was the aspect that made me the most nervous because it exposes the body to intensely cold temperatures, like an ice bath. However, it is associated with lots of health benefits including recovery from injury or surgery, improving sleep, relieving pain, stimulating the immune system, improving skin appearance and more.

The Arctic Sauna reminded me of a stand-up tanning booth except the top portion was open. Before my session, I had to change into a robe, put on some knee-high socks and rubber shoes and plastic gloves. The plastic gloves were covered with heavy mittens, and then the cabin door was opened with colder-than-ice nitrogen gas spilling out, revealing a platform for me to step on. I stood on the platform, the door was closed and I was raised so that my head was above the chamber. I passed the robe over to one of the technicians so that the nitrogen gas was hitting my skin directly. The air was intense, but bearable, especially because it was only for two minutes, instead of the typical 20 that ice bath sessions usually last.