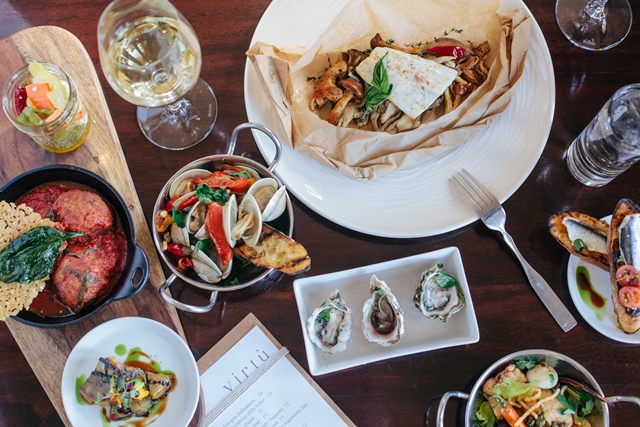 One of three restaurants located at Phoenix’s The Farm at South Mountain, Quiessence at the Farm comprises a farmhouse among towering trees and a beautiful patio (where you will find dreamy firepits and twinkle lights). Guests gather for a menu of ever-changing farm-fresh eats (with ingredients from purveyors like McClendon’s Select, Danzeisen Dairy and Two Wash Ranch), complemented by top Arizona wines. qatthefarm.com.

Chef Gio Osso has found a winning combination in his two outstanding Valley restaurants: Virtú Honest Craft makes for the ultimate date night with an intimate setting and some of Scottsdale’s most remarkable dishes (his charred octopus is what dreams are made of) while Nico, which opened early this year, serves the same quality eats at a slightly lower price point in a comfortable, more family-friendly setting (it was named after Osso’s young son, after all) to accommodate its Gilbert-area crowd. virtuscottsdale.com; nicoaz.com.

Whether your cravings call for impeccable Latin fare, French-inspired eats or cozy, Modern American cuisine, you better believe one of these romantic sister Scottsdale restaurants will deliver. Chef Matt Carter dishes up some of the Valley’s most impressive Latin dishes at The Mission in Old Town (alongside divine cocktails) while Kierland Commons’ Zinc Bistro features French faves like onion soup and croque monsieur. At the charming House Brasserie, nibble on a selection of shared plates with friends, including Maine lobster gnocchi and steak tartare. themissionaz.com; zincbistroaz.com; thehousebrasserie.com.

Chef Cullen Campbell is the mastermind behind these two unique and highly successful Phoenix eateries. Crudo makes waves with its highly inventive Modern Italian fare, and Okra, which opened in 2015, specializes in Southern eats with an Italian twist in downright divine dishes like fried chicken skins with honey hot sauce. Micah Olson heads up the bar at both establishments, crafting some of the Valley’s most standout sips. crudoaz.com; okraaz.com.

Super-stylish with innovative cuisine and a Food Network personality at the helm, elements at Sanctuary on Camelback remains one of the top spots in the Valley to see and be seen (when you want the meal of a lifetime, that is). Come dinnertime, enjoy creative dishes like kimchi bacon, escargot potpie and foie gras and wild mushroom risotta—with a side of those Camelback Mountain panoramas. sanctuaryoncamelback.com.

He’s been in the kitchen with Julia Child and made dinner for Martha Stewart. With experiences such as these, it is no shock that even a casual dinner on a random Tuesday night by Chef Christopher Gross is something special. Christopher’s Restaurant & Crush Lounge at Biltmore Fashion Park dishes up French-inspired fare, like roasted foie gras, pig’s feet and sweetbreads, in a setting that is handsome and elegant, yet far from stuffy and snooty. christophersaz.com.

Situated in two historic bungalows in Tempe, House of Tricks has been a Valley institution for more than 25 years. Enjoy Contemporary American cuisine, in the form of grilled orata or almond-crusted rack of lamb, for instance, on the lush, twinkle-light patio or inside the nearly 100-year-old, art-filled cottages. Pop in for the Farmers’ Market Special, as Chef Andrea Bales goes to the market to choose produce, then showcases it in a special dish for lunch on Monday. A portion of the proceeds of each special is donated to the Tempe Mission Campaign, which supports local nonprofits that help the homeless. houseoftricks.com.

The longest-running Four-Diamond restaurant in the state, Different Pointe of View (it’s been around for more than 31 years) also proffers some of the most gorgeous mountain and city-light views. Located at Pointe Hilton Tapatio Cliffs Resort, which just completed a multi-million-dollar renovation, the super-romantic spot dishes out such decadent eats as truffle-grilled filet mignon and Tahitian vanilla bean crème brûlée dessert. tapatiocliffshilton.com.

One is among the Valley’s most spectacular fine-dining destinations while the other is a cool, casual beer-drinker’s paradise. One boasts foie gras and Chilean sea bass on its lineup while the other might have the most impressive dessert menu in the Valley (hello, the Cereal Milkshake). Whatever you’re craving, Talavera or Proof, an American Canteen has just what you need to meet your hankering—with stellar mountain views, to boot. fourseasons.com/scottsdale.

Located at Sheraton Grand at Wild Horse Pass in Chandler, Kai remains the only restaurant in the state to be rated Five-Star by Forbes and Five-Diamond by AAA. (It was also named among the 100 Best Restaurants for Foodies in America for 2016 and No. 3 on the 100 Best Restaurants in America, both by OpenTable.) To create such memorable cuisine, Chef de Cuisine Ryan Swanson incorporates the essence of the Pima and Maricopa tribes and locally farmed ingredients from the Gila River Indian Community. Only at Kai could an appetizer called “Hand-Picked Lettuces” be such a treat. wildhorsepassresort.com/kai.