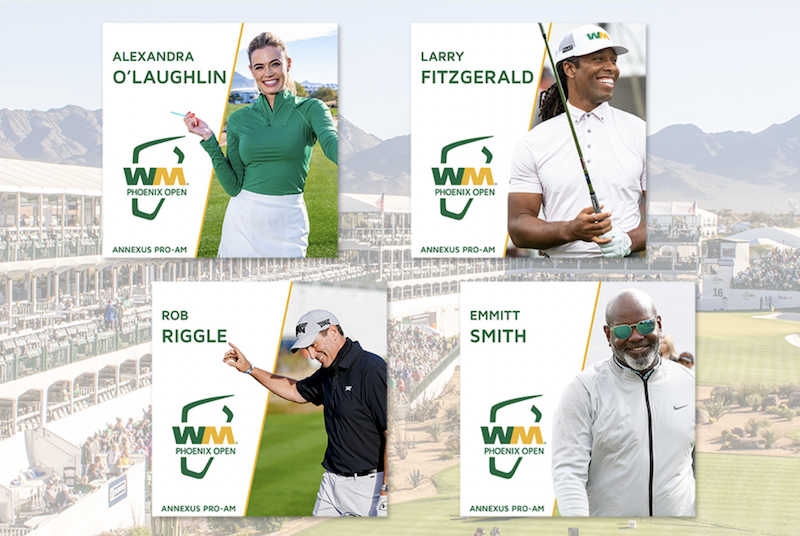 A routine fixture at the Annexus Pro-am, Fitzgerald played 17 seasons in the NFL – all with the Arizona Cardinals. During that time, Fitzgerald was named to 11 Pro Bowls, one First Team All-Pro (2008), twice led the NFL in receptions (2005, 2016), twice led the NFL in receiving touchdowns (2008, 2009), won the Walter Payton NFL Man of the Year Award in 2016 and is currently ranked second all-time in NFL receiving yards with 17,492.

O’Laughlin joined Golf Channel in 2017 as a reporter and correspondent focusing on digital and social coverage of PGA TOUR events. She has done an increasing number of travel pieces for the network including “Go Around with Alexandra O’Laughlin”, a regular segment in which O’Laughlin travels the world uncovering fun and interesting things about the game of golf.  O’Laughlin also competed in and won last year’s Shot at Glory.

Riggle is an American actor, comedian and former United States Marine Officer best known for his work as a correspondent on Comedy Central’s The Daily Show from 2006 to 2008. Riggle also was as a cast member on Saturday Night Live from 2004 to 2005, and cast as a recurring character Gil Thorpe on the sitcom Modern Family. Riggle also had a role in comedic films such as “The Hangover”, “The Other Guys”, “Let’s Be Cops”, “Dumb & Dumber Two”, “21 Jump Street”, “22 Jump Street”, “The Goods: Live Hard, Sell Hard”, and “Step Brothers”.

Tee times for the Annexus Pro-Am will range from 8:30 a.m. to 10:30 a.m.  Exact tee times for participants will be announced on Tuesday, Feb. 8 on WMPhoenixOpen.com, along with a complete list of celebrities and PGA TOUR players in the field.

The 2022 WM Phoenix Open will take place Feb. 7-13 at TPC Scottsdale. “The People’s Open” has been named the Tournament of the Year by the PGA TOUR four times in the past eight years (2014, 2015, 2018, 2019) to acknowledge the tournament’s legendary status as one the most unique events in golf. The 2022 edition will mark the 87th playing of the event (one of the five oldest events on the PGA TOUR) and the 13th with WM as title sponsor.

The Thunderbirds were founded in 1937 with the mission of promoting the Valley of the Sun through sports. The Thunderbirds consist of 55 “active” members and more than 280 “life” members who have helped the tournament eclipse $165 million in charitable giving since its inception in 1932 (through the 2021 tournament).  For more information on The Thunderbirds, visit thunderbirdscharities.org.