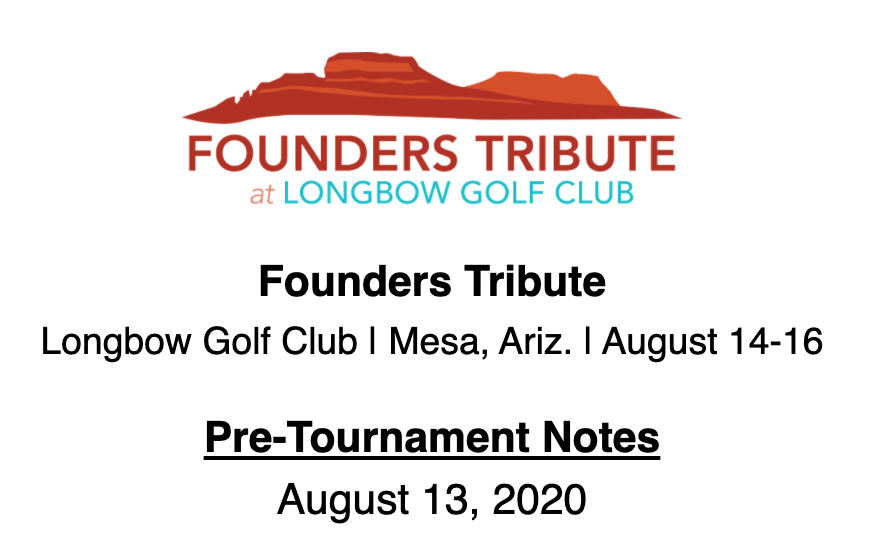 The victory also earned her an exemption into the inaugural Founders Tribute at Longbow Golf Club in Mesa, Ariz., from Aug. 14-16, the third stop on the 2020 Symetra Tour schedule.

“It’s amazing to win back to back years,” said Chien. “It is hard enough to win one tournament, and to win this event again really shows that I’ve improved since last year. It makes me feel very prepared for other events.”

In 2019, Chien accepted an exemption into the FireKeepers Casino Hotel Championship at Battle Creek Country Club thanks to her first KPMG Stacy Lewis Junior All-Star Invitational win. Although she missed the cut after shooting 76-75, Chien is ready to compete again on the Symetra Tour with the pros. Between working to improve her game during the summer months and having previously played Longbow Golf Club in the 2018 and 2019 Arizona Silver Belle Championship amateur event, Chien is here to learn and simply have fun this week.

“I have some knowledge on the course from playing here before, but I just want to enjoy myself out there and experience what it’s like to play with the pros again,” Chien said.

The inaugural Founders Tribute is named in honor of the 13 Founders who paved the way for females in golf by establishing the LPGA Tour in 1950. There is additional meaning this week as well, with a custom design tournament trophy created by local sculptor Joan Waters. The piece features layers of cutout steel with varying patinas and includes symbols of nature found in and around Longbow Golf Club.

“I was honored to be invited to design the trophy for this year’s prestigious event,” said Waters. “The one-of-a-kind welded steel sculpture I created recognizes the path forged by the original 13 Founders and celebrates the unique beauty of this desert setting. It will be exciting to know the champion will raise my creation on Sunday.”

Waters exhibits her work extensively in the Scottsdale and Phoenix area, as well as the East Coast.  Her work is found in several public and private collections. Recent commissions include public art for City of Chandler, City of Phoenix, Mesa Permanent Sculpture Collection, Mesa Community College, Copper Sun Child Center and the Burton Barr Central Library. Waters was the guest curator of the Herberger Theater Gallery for the 2007 season.

Prior to Founders Tribute tournament week, Elizabeth Schultz (Walnut Creek, California) stepped into the winner’s circle for the first time as a pro at the 2020 Women’s California State Open on Aug. 5. With windy conditions and challenging pin placements at Bear Creek Golf Club in Murrieta, Calif., the field was tested. Schultz opened play with a bogey on No. 1 and a quadruple bogey at No. 6, then settled in and found a rhythm. After the rough start, she knew she had to embrace the course and conditions.

“Typically, that is where I might snowball but I think my experience over the years helped me and I was ready to bounce back,” said Schultz. “I finished the round with a 4-over par 76. I felt like I played good golf besides No. 6, so I went into the final round with the mindset to simply play a solid round. Winning was not even on my mind.”

Over the final 18 holes, Schultz’s putter caught fire and she consistently found herself sinking long putts to save par and build momentum. She followed each bogey with a birdie and nothing could knock her down. Schultz mentioned that her focus was at its peak potential to help claim her first professional win.

“On No. 17, I drained a near 60-foot putt for birdie to win by one stroke. I am pretty sure that putt was the deciding factor,” said Schultz. “It was unreal and I didn’t expect to win. There were players that still finished behind me and the thought of where I was on the leaderboard didn’t cross my mind.”

The Founders Tribute may be an inaugural event on the Symetra Tour, but it marks the fifth appearance at Longbow Golf Club in the history of the “Road to the LPGA.”

Previously, the Tour traveled to the Grand Canyon State for the Gateway Classic from 2013-2015 and in 2017. Previous Symetra Tour winners at Longbow Golf Club include Jaclyn Sweeny in 2013, Alena Sharp in 2014, amateur Hannah O’Sullivan in 2015, and most recently Liv Cheng in 2017.

“We have enjoyed bringing the Symetra Tour to Longbow Golf Club many times through the years,” said Mike Nichols, the Chief Business Officer of the Symetra Tour. “We are especially grateful for their willingness to work with us during this challenging time and to help honor the contributions of the 13 LPGA Founders who paved the way for our athletes.”

ABOUT THE SYMETRA TOUR
The Symetra Tour is the official qualifying tour of the LPGA Tour and enters its 40th competitive season in 2020. With the support of entitlement partner Symetra, the Tour’s mission is to prepare the world’s best young women professional golfers for a successful career on the LPGA Tour. Since Symetra’s inaugural sponsorship year in 2012, the Symetra Tour has grown from 16 tournaments and $1.7 million in prize money to a record of $4.0 million in prize money awarded in 2019. With more than 600 alumnae moving on to the LPGA, former Symetra Tour players have won a total of 445 LPGA titles. Follow the Symetra Tour on the web at www.SymetraTour.com, as well as Facebook.com/Road2LPGA, Twitter.com/Road2LPGA and Instagram @road2lpga.

ABOUT SYMETRA
Symetra Life Insurance Company is a subsidiary of Symetra Financial Corporation, a diversified financial services company based in Bellevue, Washington. In business since 1957, Symetra provides employee benefits, annuities and life insurance through a national network of benefit consultants, financial institutions and independent agents and advisors. Symetra began its partnership with the Road to the LPGA in 2010 as the title sponsor of the Symetra Classic. It secured naming rights for the Symetra Tour in November 2011. In addition to its title sponsorship of the Tour, which runs through 2021, Symetra sponsors two events on the tournament schedule—the Symetra Classic and the season-ending Symetra Tour Championship. For more information about Symetra, visit www.symetra.com.