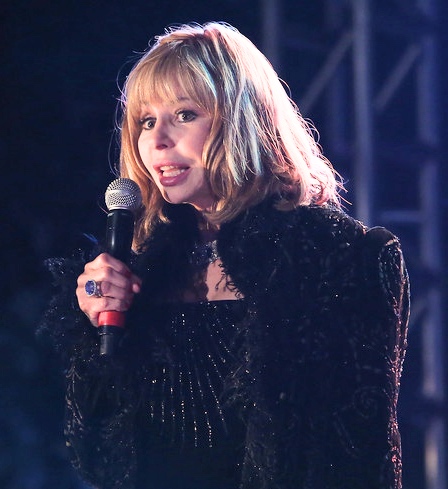 Dignitaries, non-profit who's who's and sports celebs paid tribute.

Dignitaries including politicians and sports celebrities turned out at St. Patrick's Catholic Community Church to say an emotional and tearful goodbye to Linda Pope. Linda, 64, passed away peacefully at home on July 22, 2016, with her husband Bill Pope and family at her side.

It was the memorial service for which Rob Walton and his wife Melanie flew in for from Colorado (along with Linda Robson Weiser and Dru Hammer.) Many on summer getaways also flew in just for the service, including Linda Pope's longtime close friend Michelle King Robson.

Among the pallbearers were high profile entrepreneurs and philantrhopists Ed Robson, Herman Chanen, Budd Florkiewicz and Robert Lavinia. (Robert and Ruth Lavinia are pictured below right with LInda and Bill Pope on one of the many vacations the couples shared together.) 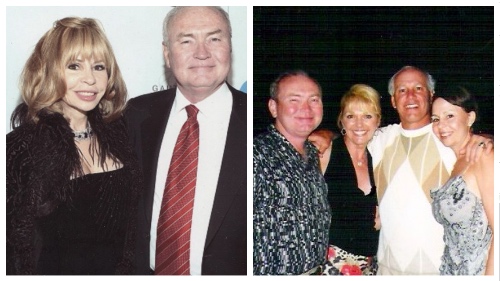 It’s hard to think of a Phoenix charity Linda wasn’t involved with on some level, from the Phoenix Heart Ball to the National Kidney Foundation of Arizona. And she and husband Bill Pope are well known Valley philanthropists.

Chevy Humphrey, president and CEO of the Science Center was one of the many other non-profit executives at the service who echoed some of Michael Barnard's sentiments.  “Linda was generous, humble and cared deeply about the causes that were near and dear to her heart,” says Chevy. "She was creative beyond comparison and was constantly striving for excellence in all that she did.  Linda had a way to push you places that you didn't think you could go.”

Linda co-chaired the Science Center's 2014 Galaxy Gala with Christi Warner-Beyer and Melanie Walton. "Linda lived fully while alive and so many were blessed by her gracious and tenacious spirit in the all-too-short time she was with us. She has now spread her wings to fly at a higher elevation," says Melanie Walton who admired Linda in many ways including her capacity to love, along with her passion directed towards helping others and expressing her creativity through the art of dance. Linda is pictured below at that event with Melani, Christi and Chevy.

Craig Jackson says Linda raised the bar for philanthropy in the Valley, encouraging more and more people to engage in these events. “She was such a great person – an ambassador for Arizona. Drive the Dream wouldn’t have happened without Linda,” says Craig of the annual fundraiser for Childhelp. Linda chaired the first gala with Michelle King Robson 12 years ago.

Additionally, this year, Childhelp renamed its Phoenix advocacy center in LInda's name. Craig is pictured below with Linda and Childhelp founders Sara O'Meara and Yvonne Fedderson. 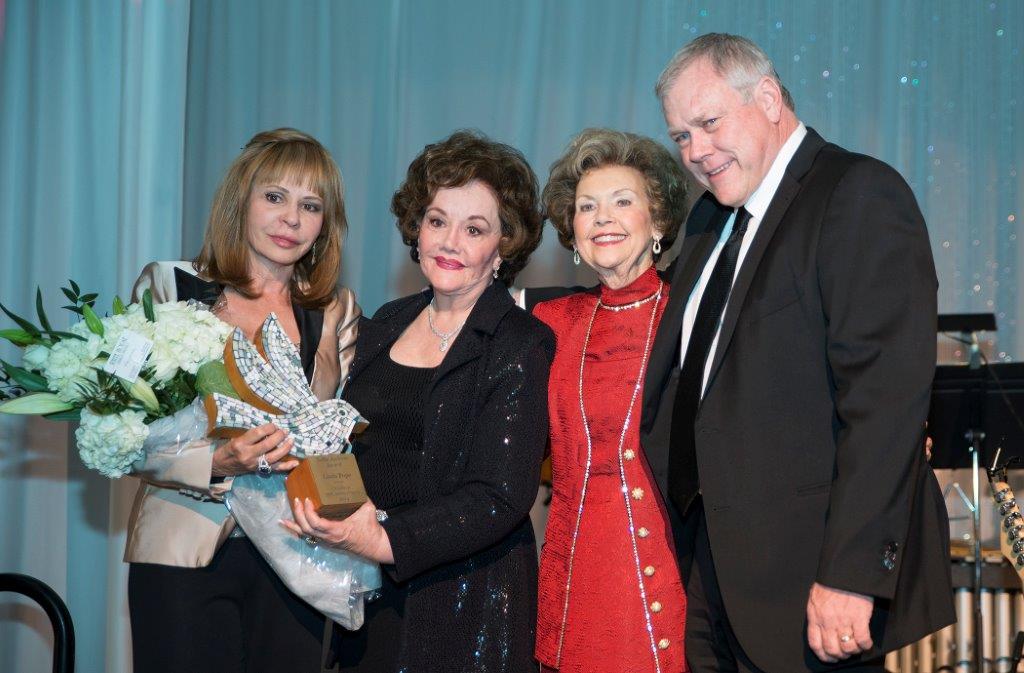 Sara O’Meara who was with Linda the day prior to her passing says, "Linda Pope’s name will forever grace the Childhelp Children’s Center of Arizona but her true immortality is her legacy of love which lives on in every life she touched with her giving spirit, inspirational intellect and huge heart," say Sara and Yvonne.

Linda, who loved ballroom dancing and competing, was also involved with charities across the country. She recently took a group of her friends to Los Angeles, for example, for the Dizzy Feet Foundation fundraiser.

Linda is pictured below at the Dizzy Feet event with Michelle King Robson and Nigel Lythgoe, dance competition judge and longtime Executive Producer of "American Idol" and "So You Think You Can Dance.". “Linda was a loving and caring wife, mother, grandmother (they called her Glamma) and friend. She did more for our community than anyone I know," says Michelle. 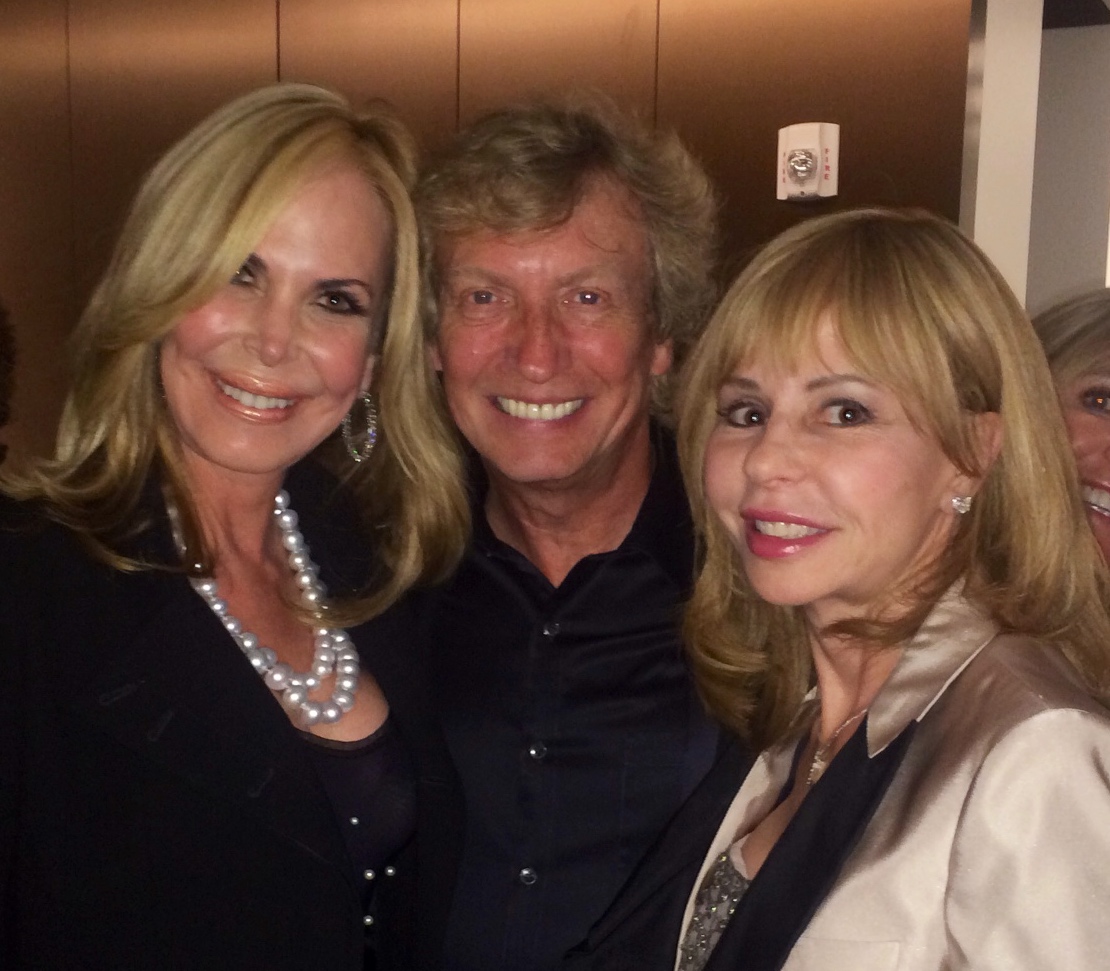 Among the sports celebs at the memorial service were Arizona Diamondbacks third base coach Matt Williams and wife Erika who co-chaired the Super Bowl VIP Big Give party with Linda. Jason Kidd, coach of the Milwaukee Bucks flew in. As did California sports/entertainment business manager Lester Knispel, Bob Bondurant and wife Pat .

(Written by Kathy Shayna Shocket, a freelance Writer, and TV- Field Producer based in Phoenix, AZ. The former TV-Reporter has written for publications such as TIME Magazine, Money Magazine, PEOPLE Magazine, The HollywoodReporter  and The NEW YORK TIMES. You can reach her at   This e-mail address is being protected from spambots. You need JavaScript enabled to view it