All About The Basketball

All About The Basketball 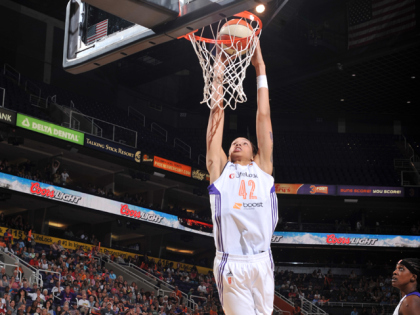 Brittney Griner, the 22-year- old basketball superstar, joined the Phoenix Mercury this past May as a first pick for the WNBA draft. She talks with AFM about her move to the Valley from Houston and how she keeps her focus on the game amidst all the publicity.

AFM: You were selected by the Phoenix Mercury as the first overall pick this past May with your first game taking place on May 27, 2013. What was going through your head before the big game?

BG: Don’t mess up, don’t trip during your first game, and just try to do everything right.

BG: I love Phoenix. It’s hot but it’s not humid, so it’s not sticky.

AFM: Is it difficult becoming familiar with a new team?

BG: No. It was more difficult becoming familiar with the city. I’ve been lost every day.

AFM: When did you first realize your love of playing basketball?

BG: I would say ninth grade, when I first started playing ball.

AFM: You played for Baylor University in Texas and quickly started breaking records. What was it like playing in college with so much success?

BG: It was a lot of fun. I can honestly say that I went undefeated, and I had a perfect season one year in my college career.

AFM: In 2012, you were awarded twice with the honor of Most Outstanding Player in the Final Four and by being named the AP Player of the Year. How do you stay focused on the game with so much publicity and such high expectations?

BG: When I get [awards and recognition], I just send them home to Mom and Dad and keep playing basketball. I really don’t think about it too much.

AFM: In one WNBA game, you personally equaled the amount of dunks scored throughout WNBA history. How did you learn that incredible skill and perfect it?

BG: I learned when I first started playing. I was tall, and the guys got me into it. Plus, I wanted to learn how to dunk. They taught me, and I just worked on it.

AFM: It was recently announced that you will become the first openly gay athlete to be endorsed by Nike. Your contract says you have chosen to model men’s style clothing. Why have you chosen that particular style?

BG: That’s just my style. I wear more men’s jumpsuits and shirts, and I’m kind of big too, so it fits me really well.