Best Of Our Valley 2011- Week One Frontrunners

Best Of Our Valley 2011- Week One Frontrunners 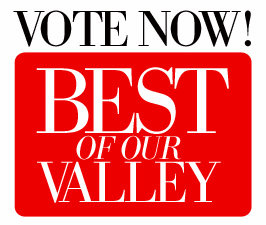 October 7, 2010 (Scottsdale, Ariz.)- The first week of voting for Best Of Our Valley 2011 is almost complete, and the votes are pouring in! Currently, the person with the most total votes- who currently is in the lead to win the cover of the March 2011 issue- is one of our nominees for "Top Twitterer"-

Current front-runner Mike Shaldjian, also known as @Lafinguy, and second-place contender Johnjay Van Es, also known as @JohnjayVanes, are both up for Top Twitterer- proving the power of Tweets! Runners-up include Julie Chambers and Aimee Josette, both up for Most Stylish; and The Hamptons, who are in the running for Best Band.

The one Best Of Our Valley nominee with the most total votes at the end of the two-month long contest will be dubbed "The Coolest Thing in the Valley" and be featured on the cover of the Best Of Our Valley March 2011 issue in an Arizona Foothills-styled shoot.

"Arizona really is the best place to live," says President & Publisher Michael Dee, "it's so great to see how passionate our readers and contenders are in determining the best in each category."