When 12 Children are Waiting for Dad’s Brain Surgery . . . 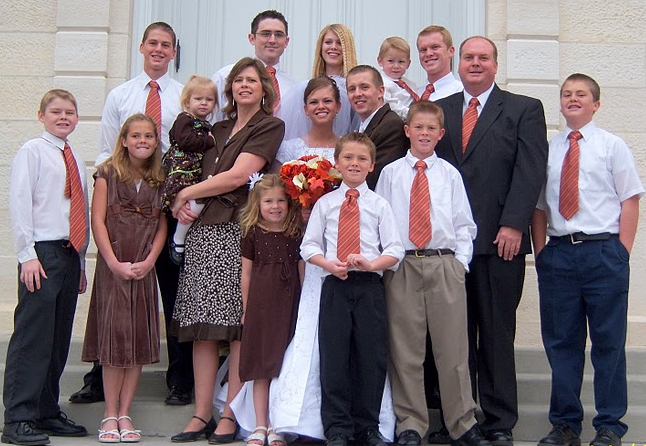 Three generations of the Beatty family – Paul and his wife, Lynnette, their twelve children and two grandchildren – gather for a family wedding.

“Let me be clear. Every patient is important and every surgeon wants to do his best work on every patient,” said John C. Lincoln neurosurgeon Igor Yusupov, MD.  “But it adds a new dimension when you know your patient has 12 children depending on his recovery.

“That’s when you know you have to do everything perfectly,” Dr. Yusupov said.

The need to do everything perfectly was complicated by the location of Dr. Yusupov’s patient’s tumor.  Medical imaging showed the patient, Paul Beatty, had a benign tumor deep within his brain, about three inches behind his left eye, growing on the edge of the tough membrane  known as the dura that covers the brain.

“Benign,” Dr. Yusupov explained, “means it wasn’t cancerous. It doesn’t mean the tumor isn’t a problem or that it wouldn’t become a worse problem if it were allowed to continue to grow.”  In fact, the tumor was growing at the base of Beatty’s hypothalamus, a portion of the brain that’s just above the brain stem. 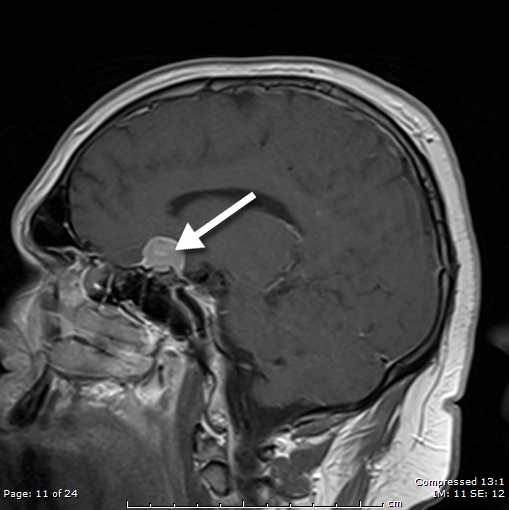 An MRI of Paul Beatty’s brain shows his skull in profile, facing left, and the arrow points to the one-centimeter tumor deep behind his left eye.

The hypothalamus links the nervous system to the endocrine system, and it controls automatic processes like hunger, thirst, sleep, fatigue and body temperature.

Beatty’s tumor touching his hypothalamus may have been responsible for his first symptom of trouble brewing. “I stopped sweating,” he said.  “At first I didn’t notice or pay attention to the lack of sweat, but then my body overheated and I passed out.”

When that happened Beatty was in the animal shelter area of the Snowflake/Taylor Police Department, where he works as an animal control officer.  “I was alone,” he said, “so when I woke up, I called for help and they sent an ambulance.”

It took a while to figure out what was wrong.  “At first they thought I was just dehydrated, but I went to my family doctor for a bunch of tests.  He couldn’t find anything, so he sent me to an endocrinologist who tested my thyroid and adrenal glands. That didn’t show anything either, so the endocrinologist ordered an MRI and that’s when the tumor was spotted.”

His endocrinologist referred him to John C. Lincoln and Dr. Yusupov, who was “excellent,” Beatty said. “His attention to detail, his bedside manner were really reassuring.  He is so personable.”

Dr. Yusupov was also determined to make sure Beatty came out of surgery in the best possible condition so he could return to his family.

He used John C. Lincoln’s sophisticated computer mapping system to precisely locate Beatty’s tumor. The computer program correlates photographic images of passive markers glued to the patient’s scalp with MRI images of the patient’s brain and displays three-dimensional images on a monitor so the neurosurgeon can see exactly how to best reach the tumor.

“One of the challenges the mapping system illustrated is that the tumor was so deep in Paul’s brain,” Dr. Yusupov said. “Brain tissue doesn’t react well when it is disturbed. That’s why I didn’t want to take a standard route to the tumor. We would have had to disturb too much of the brain tissue and there could have been adverse effects.”

Instead, guided by a sophisticated surgical microscope, Dr. Yusupov accessed the tumor by going through Beatty’s forehead and frontal sinus cavity, outside of the dura.  He used the hospital’s Sonostar ultrasound technology to break down, or “debulk,” the tumor and then he vacuumed out the pieces of tumor tissue.

“It was nerve-wracking,” Dr. Yusupov said. “Usually doctors try to keep from becoming too attached to patients so we can maintain perspective. But there was an emotional component to this case. Paul is such a nice guy, and his wife was so grateful. There was just no room for error.”

And for Beatty, his wife, their 12 kids and three grandchildren, that’s the way it turned out. Beatty left the hospital just a few days after surgery and is home recovering, three months later.  “Dr. Yusupov told me to take it slow, not to push myself, and I’m trying to do that,” Beatty said.

He said while “overall I feel pretty good,” he confessed there are good days and bad days.  “I put on a good face for the kids. We use a lot of humor to cut through the stress.”

“People don’t realize how stressful brain surgery is for patients,” Dr. Yusupov said. “In many ways, the stress level is equal to getting hit by a truck. The body’s post-surgical caloric demand can surge up to 5000 calories a day. People have to give themselves time to recover before trying to return to all the things they did before they went into the hospital.”

A major factor getting the family through the surgical and recovery process, Beatty said, “was our church and community.  We have had such great support – they brought dinner for the kids every night that my wife was with me in the hospital and they’ve been there with us every step of the way.”