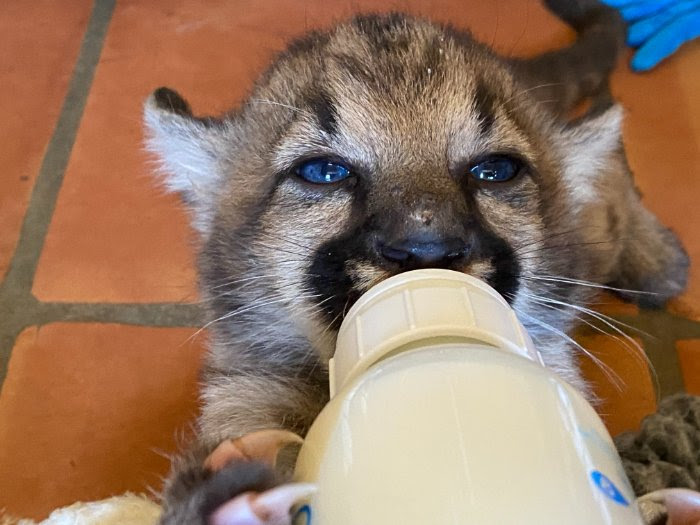 An unsuccessful fostering attempt of two mountain lion kittens has brought them to a new home, The Southwest Wildlife Conservation Center.

The kittens, found in Simi Hills, California, were left orphaned after biologists with the National Park Service (NPS) discovered that their mother, a two-and-a-half-year-old female mountain lion, was dead. According to the biologists, the three-week-old kittens would not be able to survive in the wild without a mother.

The kittens’ mother died of rodenticide poisoning, a commonly used mouse and rat poison. Rodenticide is primarily used around homes to rid properties of rats and mice but can have devastating results for other species. Whatever animal eats the poisoned rat or mouse will suffer the same fate; pets and wildlife included.

The kittens are now about three months old and live at their forever home, the Southwest Wildlife Conservation Center. The kittens are adjusting to their new home and have begun to show typical wild cat behavior: stalking, wrestling, and climbing. They come out of their shell more and more every day and have even begun to develop their own personalities; the female is bolder while the male is laid-back.

“They are inseparable and a great comfort to each other,” said Linda Searles, director at the Southwest Wildlife Conservation Center.

The kittens even have a new next-door neighbor and mentor, a 15-year-old mountain lion named Tocho. Searles said if the two kittens and Tocho get along, they can all live together in his large enclosure. 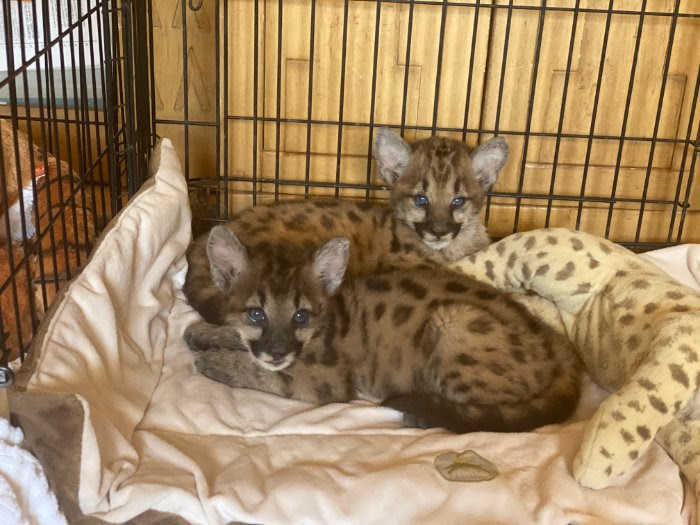 “It’s too bad they couldn’t live in the wild, but we’re happy that they can give our old guy companionship,” Searles said.

The story of these orphaned kittens is truly remarkable. NPS at Santa Monica Mountains National Recreation Area (SMMNRA) and the California Department of Fish and Wildlife (CDFW) decided to try something new for the kittens. Their story began when Justin Dellinger, the statewide mountain lion

researcher for CDFW suggested trying what is thought to be the first experiment of its kind for this species: to attempt to foster them.

Fostering involves getting a wild mountain lion mother to “adopt” kittens that are not hers and has been regularly successful in other large mammals. However, just four days into the attempt the “adoptive” mother moved dens and left the kittens to fend for themselves.

“The story of this fostering attempt is remarkable,” said NPS Superintendent David Szymanski. “Biologists and managers from four organizations – a federal agency, a state agency, a city zoo and a private sanctuary came together to try something new – help two orphaned wild animals and further our understanding of this important species.”

“Our shared goal for this project all along was to keep the kittens in the wild and, although the new mother did not accept them, we gained considerable knowledge from this experience,” said Christine Thompson, a regional biologist with the CDFW. “We were also able to successfully place healthy kittens in a new home. Many thanks go to NPS, Los Angeles Zoo, and the Southwest Wildlife Conservation Center for their dedicated efforts.”

Although it was unsuccessful, the efforts to foster the mountain lion kittens were worthwhile to attempt to keep the kittens in their natural habitat and to learn more about mountain lion behavior. The kittens are now in a safe and new home with a new neighbor and potential roommate.

Southwest Wildlife operates solely from the public’s support and relies on donations and grants to keep the facility open with trained volunteers and veterinarians caring for the animals 24/7.

Established in 1994, the SWCC rescues and rehabilitates wildlife that has been injured, displaced, and orphaned. Once rehabilitated, they are returned to the wild. Sanctuary is provided to animals that cannot be released back to the wild. SWCC also offers educational programs and opportunities in the field of conservation medicine. Wildlife education includes advice on living with wildlife and the importance of native wildlife to healthy ecosystems. For more information or to donate go to https://www.southwestwildlife.org/.

To make a donation or for more information on how you can sponsor an animal please visit https://www.southwestwildlife.org/donate/donate/donate.html. The nonprofit Scottsdale animal refuge has listed preferred donations on a wish list on its website and an Amazon wish list. That list includes enrichment toys for the animals as well as other items SWCC needs.