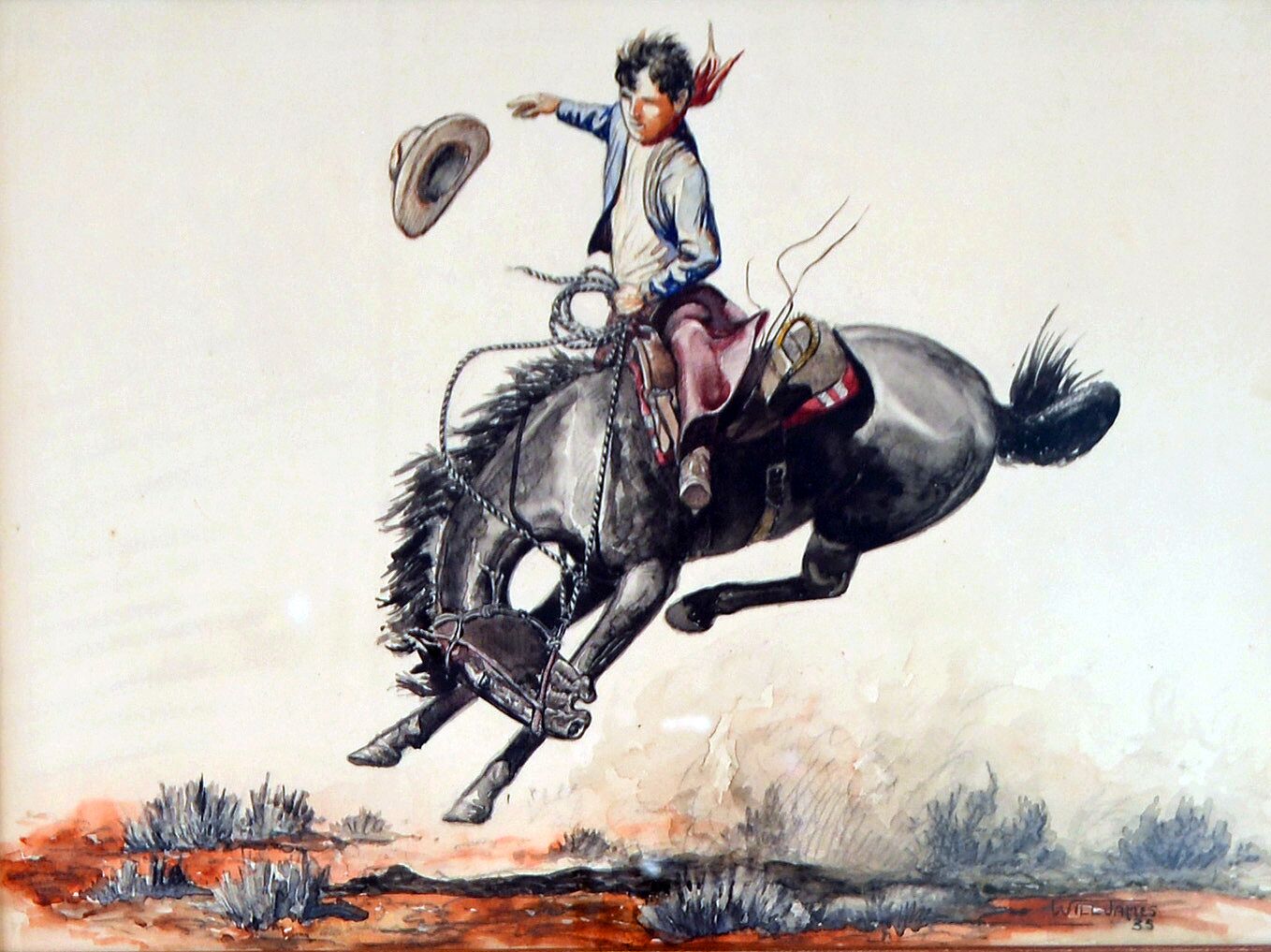 Western Spirit: Scottsdale’s Museum of the West (SMoW) announced the public opening and second run of Will James: Cowboy Artist and Author – an exhibition back by popular demand and on loan to SMoW by Paradise Valley, Ariz., resident, Abe Hays, for an exclusive three-month showing.

The exhibition is open to the public through Aug. 18 and features James’ paintings, drawings, etchings, books and ephemera. The Abe Hays Family Will James Collection is the largest and most comprehensive collection of James’ work in private hands.  It features 80-plus original works of art, all 26 of his books and those illustrated by James for other authors; letters; photographs; posters; prints; and artifacts including his Winchester M1894 carbine rifle, pen knife, World War I dog tags and his saddle.

James (1892-1942) was a prolific Western artist, illustrator and writer who was best known as one of the greatest “action artists” of all time and as author of the award-winning book, “Smoky the Cowhorse,” which won the prestigious Newberry Medal for children’s literature and was made into three film adaptions. James had 26 books published, and eight of them will also available for sale in SMoW’s Sue and Robert Karatz Museum Store.

Will James was born near Montreal, Canada, and named ‎Joseph Ernest Nephtali Dufault.  He sketched at a young age and always dreamed of becoming a cowboy. At 15 he left home, found his way to the U.S. West, where he changed his name to Will James and began working as a cowboy for large and small “cow outfits.”  James also spent some time in Hollywood performing as a daring stuntman on horseback and as a bit player in various Western films.  He was always known as the “cowboy who drew pictures.”

“As a working cowboy, Will James was able to work up close and personal with horses and cattle. In his artwork, most notedly his illustrations, James perfected the expression and muscle-packed energy of his subjects -- especially horses,” said Dr. Tricia Loscher, Assistant Museum Director -- Collections, Exhibitions and Research for SMoW.  “We are thrilled to bring back this popular exhibition for a limited three-month run during our Summer season so that locals, staycationers and visitors alike can come in an experience the life-force of this extraordinary iconic Western artist.”

The exhibition will be featured in the Nina Mason Pulliam Charitable Trust Fine Arts Gallery and returns to SMoW after being part of its grand opening collection when the museum first opened its doors in Jan. 2015.

“Will James is the greatest gestural artist America has produced to date,” said Abe Hays. “His action drawings in Lalla and my collection show the skill he possessed many times over.  We are thrilled to share this collection -- once again -- with the guests of Scottsdale’s Museum of the West.”

Dedicated to telling stories of the Greater Western Region with both permanent and rotating exhibitions, the Will James exhibition is one of eight new exhibitions featured in the 2018-19 season at the four-year-old Smithsonian Affiliate destination. Soon-to-arrive exhibits in the fall include artworks by Maynard Dixon, as well as the Gil Waldman collection.  SMoW helps its guest “See the West from a whole new perspective” and connects visitors of all ages to the Western lifestyle – past, present and future.