Details - Mummies of the World: The Exhibition 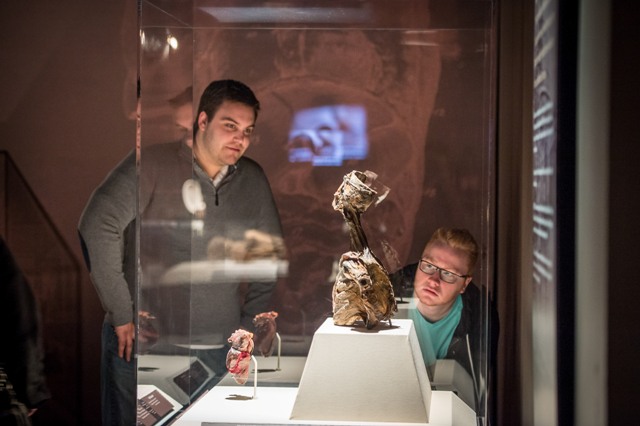 The largest collection of real mummies and related artifacts ever assembled is coming to Arizona Science Center. Premiering the evening of February 9 with the Center’s Galaxy Gala, and open to the public February 10 through September 2, 2019. Mummies of the World: The Exhibition features 40 real human and animal mummies and 85 rare artifacts from across the globe. This blockbuster exhibition, arriving in Phoenix straight from Budapest, Hungary, provides a window into the lives of ancient people from every region of the world including Europe, South America and Ancient Egypt, offering unprecedented insights into past cultures and civilizations.

The exhibition will enthrall guests with dramatic displays of the mummies and their personal stories, as well as state-of-the-art multimedia stations that will take visitors on a 4,500-year journey to explore the mummies’ history and origins as well as how they were created.

Through modern science, Mummies of the World: The Exhibition demonstrates how mummification can take place through both natural and intentional practices. Included in the collection are the Vac Mummies, a mummified family from Hungary believed to have died from tuberculosis, preserved in a small church until the remains of 265 mummies were discovered by a bricklayer during repair work in 1994; Baron Von Holz, a German nobleman found tucked away in the family crypt of a 14th century castle wearing his best leather boots after perishing in the castle while seeking refuge from the Thirty Years’ War; Egyptian animal mummies including a cat, falcon, fish, dog and baby crocodile, many of which were deliberately preserved to accompany royals for eternity; as well as MUMAB, the first authentic replication of the 2800 year old Egyptian mummification process, performed on a deceased Maryland man in 1994 using the same tools and methods as described on ancient Egyptian papyrus.

Mummies of the World: The Exhibition opens the evening of February 9 with the Center’s Galaxy Gala and is open to the public February 10–Labor Day, September 2, 2019 in the Sybil B. Harrington galleries at Arizona Science Center, located at 600 E Washington St, Phoenix, AZ 85004. Mummies of the World: The Exhibition requires a timed-entry ticket. Advance purchase is highly recommended. Members can purchase tickets beginning Monday, October 1, 2018. Ticket sales open to the public on Monday, October 8, 2018. Guests can purchase tickets online at azscience.org, or in person at Arizona Science Center. Mummies of the World: The Exhibition tickets are $9.95 for Member adults and $7.95 for Children (3-17). They are $11.95 for Non-Member adults and $9.95 for Children and $6 for Groups of 15 or more. The exhibition requires purchase of a general admission ticket.