Just when we thought the Phoenix dining scene was done booming with incredible new restaurants, this saint came marching in. 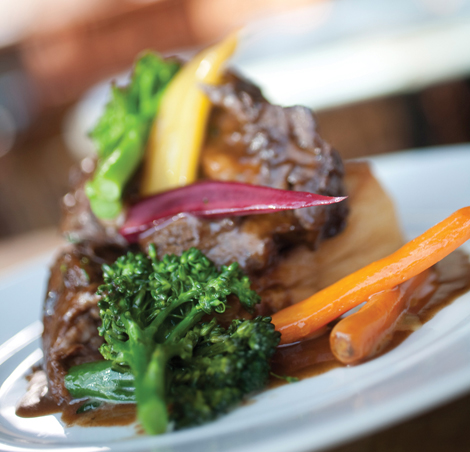 Aaron Chamberlin is a name that many Valley foodies know and love. The chef worked for several years at a few of Phoenix’s most fashionable feasting spots, like La Grande Orange Pizzeria, Chelsea’s Kitchen and Radio Milano. Late last summer, Chamberlin became the chef and owner of the new St. Francis eatery, infusing the hipness of his former restaurants with fresh American fare that utilizes many local ingredients. The name of the restaurant even pays tribute to its Phoenix roots: “St. Francis” comes from the neighborhood’s land deed from 1936.

During our visit, on a Tuesday evening mind you, the entire restaurant and its open-air patio were packed with hungry people. Folks who wanted to see and be seen were lined up at the cool indoor/outdoor bar, sipping the divine almond margaritas and St. Francis lemonades. Others took a table on the patio, which was separated from the main dining area with a roll-up glass door, under the hatch-inspired canopy and strings of white lights. Even Phoenix mayor Phil Gordon happened to swing by that evening.

Inside, the smallish dining room (though the second story, which will have views of Piestewa Peak, was scheduled to open after our visit) has metal-topped tables paired with Eames-like wooden chairs and a few booths for large parties. The original brick walls add to the rustic-contemporary feel of the restaurant, as does the industrial lighting and polished concrete floors. You’ll also spy a roughed-in atmosphere in the restrooms, where the sink is a simple copper plate. Back in the dining room, the St. Francis insignia that graces the wood-beam ceiling is a nice touch. And we loved St. Francis’s spoon themed imagery, which appears on the menus and the server’s shirts.

For a starter, we dug into the sweet corn chowder, topped with purple potatoes and a streak of chive oil. (There was also a salad, a potato dish and a cheese offering to choose from.) The spectrum of colors—purple, green and yellow—resulted in a superpretty presentation, and we appreciated the silky texture and subtle sweetness of the soup. The server, however, neglected to split our chowder into two separate bowls, although we mentioned that we were sharing it.

The entrée menu is divided into three categories: seafood and vegetables, wood-fired brick oven and butcher’s cuts. While the Forbidden Rice Bowl sounded oh-so enticing and the ahi tuna sandwich with fennel, olive aioli, avocado and sweet and sour vegetable salad would make a tempting lunchtime choice, we went with the flatbread crowned with black mission figs, arugula and Black Mesa Ranch’s goat cheese for our evening meal. The sweet figs and the incredibly creamy goat cheese were delicious against the wood-fired flatbread. In fact, we would have happily eaten the crisp yet puffy flatbread crust solo. We also tried the open-face pot roast sandwich with broccolini and caramelized carrots. The sandwich is perfect for this chilly time of year. The warming, comforting dish was reminiscent of the roasts your mother might make, only with more attention to pretty details (Chamberlin added a dose of color, again, this time with purple carrots). Though we’d definitely order the yummy pot roast plate again, the bread that the meat was served on was a bit too buttery.

While the dessert menu is limited to only three options, there is a choice for just about any taste. During our visit, those selections consisted of sticky toffee pudding with sweet cream gelato, an apple cobbler (which was taking the place of the dreamy-sounding St. Francis staple, strawberry and figs with aged balsamic) and a chocolate-hazelnut parfait. We opted for the latter sweet treat and were pleasantly surprised by the salty-sweet flavors. The small sundae dish packed in salted hazelnuts, whipped cream, caramel and wonderfully moist chocolate cake—a fun dessert to share if you don’t mind spoon wrestling for the tasty hazelnuts. For his cast of desserts, Chamberlin actually drew inspiration from vintage cookbooks, adding to St. Francis’s rustic-meets-modern flair.

Though leaving the restaurant’s parking lot after dinner might be a small hassle—they really pack those cars in—it’s hard to feel any road rage after experiencing such a heavenly spread at St. Francis.