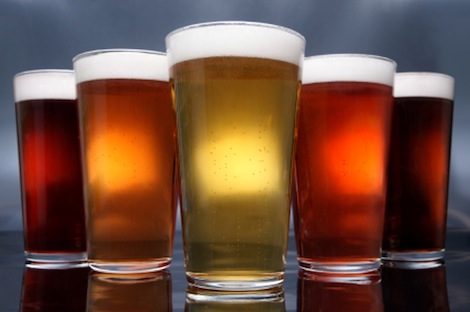 Beer, sometimes it's what's for dinner. Once upon a time in a land long, long ago, there weren't as many beer choices as there are today. In order for the traditional companies to keep up with the micro brews they are coming up with new ideas.

Some of these new ideas will be trending, some of them won't. While the craft brew trend is still in full force, there are some new things in store this year that you may not have heard about. Keep reading to find out more.

Anheuser-Busch, the makers of Budweiser beers, among others, works hard to stay with the game when it comes to beer. They even released Redbridge a few years ago, a beer made from sorghum that is gluten-friendly so that Celiac sufferers didn't have to suffer the loss of their beer drinking days.

To keep up with all of the flavored micro brews, Anheuser-Bush also released Wild Blue, Wild Red and Wild Black, which are fruit infused malt beverages. Now they even have a hard apple cider, Johnny Appleseed, leading us into the trend of the hard cider.

It's not beer, but it's not far from it. Hard cider is a popular drink for many these days, and especially for those with gluten issues, since hard cider is naturally gluten free.

Many hard cider makers are now adding in hops to give the cider more of that bitter ale flavor that people love so much, putting them one step closer to the world of craft beer.

There are also companies creating styles of beer made from honey. Kind of a mead meets hard cider. They are usually gluten free, and can sometimes include that hoppy flavor beer drinkers love.

While some reports say beer consumption has decreased a bit in recent years, innovations in micro brews and other beer trends contribute to a thriving industry. New micro breweries are popping up everywhere, more people are trying out home brewing, and more towns are adopting their own beer festivals, giving people even more excuses to drink.

Another interesting beer trend that has come about lately is the beer auction. People can bid on great beers online, normally finding fine beers and hard to find brews.

With the popularity of certain television shows and movies, another new trend that is sure to become popular quickly is the inspired beer line. Game of Thrones has already inspired beer  makers. Media inspired beers isn't a new thing, but it is definitely growing.

Lord Of The Rings inspired a line of beer not that long ago. Whether it's just the name of the brew or its actual flavor that gets that inspiration, it gives the beer a gimmick that gets it flying off the shelves.

Are you a beer drinker? Some people prefer to stick with the old fashioned stuff, like Busch or Coors. Others have a special love for craft beers, no matter how high the price tag. Where do you stand?