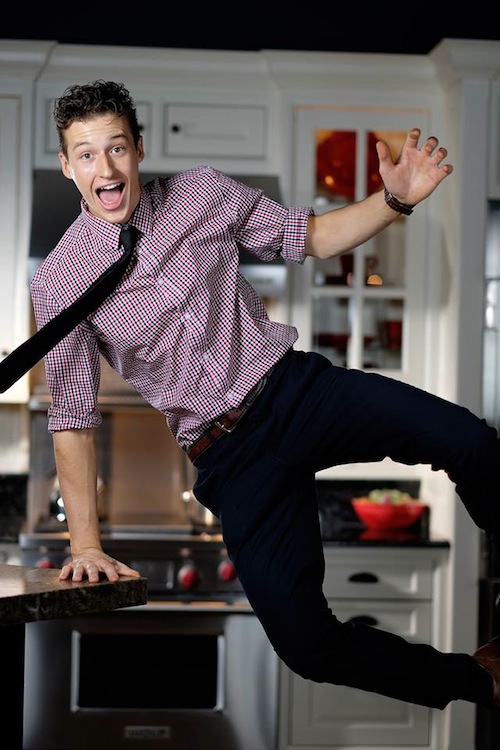 Scottsdale native and professional chef Matthew Grunwald knows a thing or two about cooking. Starting June 7, the 22-year-old will compete on Food Network Star as the show’s youngest ever contestant, where he’ll simmer, slice and sauté to the death against 12 other finalists – some twice his age. And although he’s hungry for the win, Grunewald is adamant that it will always be about the food. “It’s a catalyst for bringing people together,” he says passionately. “It makes the dinner plate a destination.” Read on for more words of wisdom from this budding culinary superstar.

AFM: What was the audition process like for Food Network Star? How did you react when you were selected as a finalist?

MG: I had actually tried out the year before and made it pretty far in the process but didn’t actually physically go to the on-location audition. So this last year, I traveled to Los Angeles and created a signature dish and did a little camera interview and then just waited to hear back. And I did. And it was flooring… It’s the chance of a lifetime; it’s everything I’ve been looking forward to my entire life.

AFM: You are ridiculously confident in front of the camera. Is that something that comes naturally?

MG: It really just comes from years of experience. I’ve actually been cooking on live television [since] I was nine years old. When I turned 16, I started doing cooking segments here in Arizona on Channel 12, 15 and 10. So really, being in front of the camera and creating a theatrical moment for food has always been something that’s been very natural to me. But what it really comes down to is practice makes perfect. I think that’s where that sense of exuberance comes from.

AFM: When did you first know you wanted to be a professional chef?

MG: I would say when I turned 16 and made the decision to set into motion plans for culinary school. Before that, I cooked all the time but it was home cooking and I had not yet had a restaurant job. When I first started as a prep cook when I was 16, that was really the first step in the direction of like, ‘…this is what I’m going to do.’ I [made] a commitment to myself and this craft because this is what I love.

AFM: Can you walk me through the process of creating a dish from scratch?

MG: It’s like you go into another realm - you kinda of get lost in it. It’s so exciting and you’re immersing yourself in the process. You look at acidity, you look at sauce, you look at heat, you look temperature, spice… I cook whatever I’m craving and if I have the ingredients in front of me, no matter what it is, I can turn it into something great.

AFM: After a long trip away from home, which Valley restaurant can we find you at?

MG: Shoot. La Grande Orange. LGO. There’s nothing better than getting a coffee and a rotisserie chicken with their homemade barbeque sauce. It’s pretty on point.

AFM: Who or what do you draw inspiration from?

MG: Hands down, classic French technique. From there, all sorts of media. I’m heavily involved in social media and seeing what’s trending. Diners are constantly exhausting their palates and they want something new, so I think it’s important as chefs that we develop new techniques and new ideas on old classics.

I [also] read a ton of books. And not just cookbooks in regards to recipes. There’s something about reading that transports you to a location, especially if you don’t have the means to travel… You’re looking through the lens of someone else that has physically experienced and tasted different cuisines.

AFM: What sets you apart from your competitors?

MG: I’m the youngest finalist to have ever been featured on the show. I’m 22 years old and I have the cooking chops of an executive chef. You’ll definitely see that unfold in the first episode. I bring a youthful approach to my cuisine, something that’s new and exciting from a young professional’s perspective. I dwell in Southwestern influences – Southwestern and Asian fusion is really sort of my groove throughout the show. [But] my age. Definitely.

AFM: How will you mentally prepare for the upcoming competition?

MG: I work in such a high-pressure environment in the restaurant [Grunewald works at elements restaurant at Sanctuary Camelback Mountain] every day… and there’s definitely a demand to perform, so it’s not something I’m not used to. I really rally when I’m under a lot of pressure, so I don’t know. I do get nervous but I’ve trained myself – I sound like a ninja [laughs] – to slow my heart rate and breath through my nose, out through my mouth. You’re using the adrenaline and that nervous energy.

MG: Surround yourself with people [who] are better than you. Steel sharpens steel.

And now for some fun stuff...

What did you have for breakfast today? Three over-easy eggs with salsa verde and guacamole.

Starbucks – what’s your go-to drink? Four shots of espresso over ice in a Venti cup.

Most memorable fan encounter? The first time I ever got recognized was in Wal-Mart by this elderly lady. It was really cute. We were in the produce section and she just was asking me questions and I helped her plan her dinner for that night. I was taken aback.