Stephanie Mannon is the 2010 Face of Foothills!

Stephanie Mannon is the 2010 Face of Foothills! 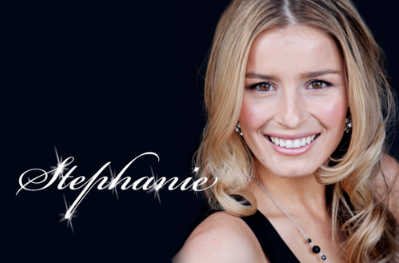 Mannon will receive an unbelievable prize package valued at more than $10,000, and will be the face of AZFoothills.com beginning January 1, 2010. She will also be seen on cover of the January issue of Arizona Foothills and it's fashion spread. Other prizes include a $5,000 gift certificate from Molina Fine Jewelers, $1,000 in cash from Arizona Foothills Magazine, $500 and gifts from Saks Fifth Avenue, 3 nights in a Wonderful Room at W Scottsdale, four bliss spa treatments, ZOOM Whitening from Dr. Joyce Bassett, Tasti-D-Lite frozen dessert for one year and hair styling credit for one year.

The winners were announced at the first-ever Face of Foothills finale party at W Scottsdale. Guests enjoyed Champagne, Sushi Roku bites, tunes by Mr. P-Body, a live photo shoot by Saks Fifth Avenue, fun paparazzi and model photo ops and bliss spa and Guerlain makeup samplings. The winner was announced at 8:30, and was recorded live for FOX news.

The contest began with 100 models, and after a month of Web voting was narrowed to the top 50. The 50 were then narrowed to ten finalists through another month of voting. The contest generated thousands of entries and received more than 15 million votes, helping catapult the Web site into the top 3,000 in the world. The finalists all met a panel of Arizona Foothills Magazine judges, including the President/Publisher, Creative Director and Fashion Director, who determined the first-ever Face of Foothills!