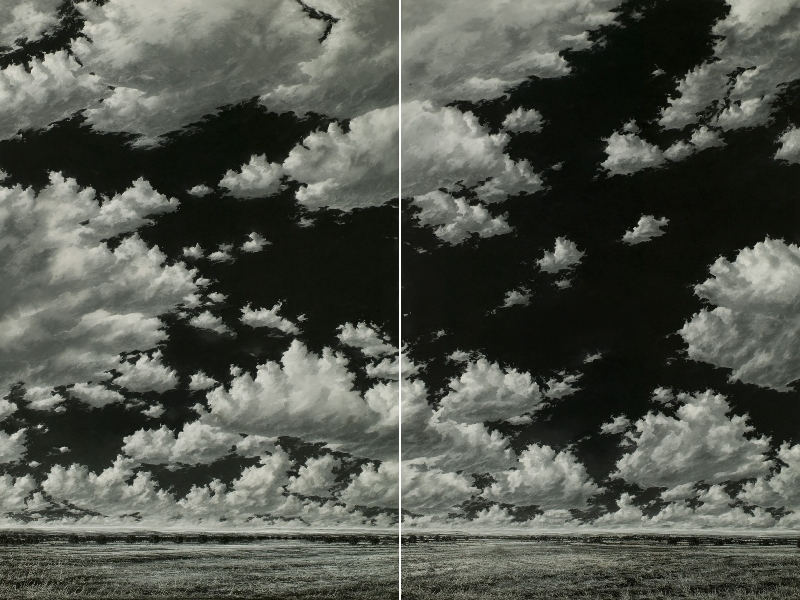 Experience what a painting might sound like or what sounds could look like at “I hear what you’re seeing,” a new exhibition from Scottsdale Arts Learning & Innovation at the Center Space gallery inside Scottsdale Center for the Performing Arts, 7380 E. Second Street, from Jan. 17 through April 26.

The exhibition features seven visual artworks by six different artists. The artworks are interpretively translated into sound works by six graduate students at the School of Music and the School of Arts, Media and Engineering at Arizona State University’s Herberger Institute of Design and the Arts.

“I hear what you’re seeing” is an experiential exhibition, meant to bring sight and sound together to heighten art’s inherent quality of conveying a mood, telling a story, and igniting the imagination.

“Both visual and sound-based art can evoke moods and emotions without the need for words,” said Laura Hales, curator of education for Scottsdale Arts Learning & Innovation. “I am intrigued by this idea and wanted to explore how the two artforms could complement each other to provide a rich experience for gallery visitors.”

As the curator for this exhibition, Hales chose paintings and drawings by local professional artists and asked graduate students at ASU to narrate the visual pieces with sound works. In some cases, the sound and visual artists met to discuss their ideas, informing each other’s work.

“It has been a truly collaborative process,” Hales said.

Among the artists who collaborated were painter Ellen Wagener and sound artist Jacob Miller Smith. They spent a day together in Wagener’s studio discussing her large pastel painting “Cloud Bank,” which will be part of the exhibition.

“What I found most interesting about our conversation was learning how Jake works in an ‘abstract manner’ and that we both love to listen very deeply to the unanticipated sounds of nature—even the sounds you hear in the backyard—as a symphony of oratorical improvisation,” Wagener said.

During the discussion, the artists agreed that the clouds in Wagener’s painting spoke to both of them about the hope for rain in the desert. As a result of that discussion, Wagener said Smith was likely to create a “sensitive work” that records the sound of ice melting or the staccato repetition of water dripping.

Yet the sound aspect of “Cloud Bank” preexists Wagener’s collaboration with a sound artist. Wagener said she doesn’t use cameras to record subject matter for her paintings. Instead, she prefers to look at the landscape, smell it, listen to it, and then use all her senses to conjure the image while painting. She likens it to playing a musical instrument.

Among the other artists featured in the exhibition is painter Cam DeCaussin, whose moody depictions of suburbia appear ready-made for sound interpretation. Sound artist Shomit Barua collaborated with DeCaussin for the exhibition.

During their discussion about DeCaussin’s work, Barua said they discussed DeCaussin’s inspirations, including the art of Edward Hopper and music from “Twin Peaks,” which DeCaussin uses to build Pandora stations while he’s painting. Barua realized they shared similar tastes, which in turn inspired his own sound design for the exhibition.

DeCaussin’s work is also currently featured in another Scottsdale Arts exhibition. His one-man “Lies Unsaid—Paintings by Cam DeCaussin” is on display at Scottsdale Public Art’s Appaloosa Public Gallery at the Appaloosa Library in north Scottsdale through Jan. 31.

Center Space, inside Scottsdale Center for the Performing Arts, was formerly known as the Young@Art Gallery. It is a community space for visitors to learn about the arts by both viewing and interaction. It is open to the public daily from 10 a.m. – 5 p.m. and during evening performances at the Center. For more information about Center Space and this exhibition, visit ScottsdaleArtsLearning.org/Exhibitions.