Dishing up American cuisine with a dose of South American and Spanish influence, Province is adding even more flavor and style to ever-burgeoning Downtown Phoenix. 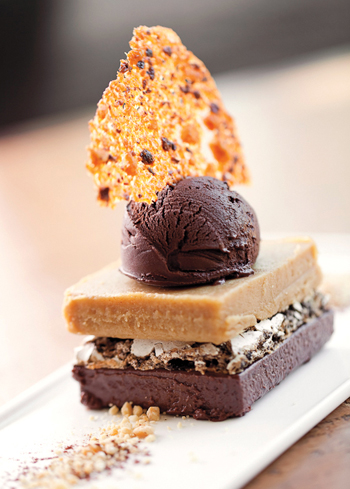 In the spring, Downtown Phoenix was graced with a new high-end high-rise hotel, Westin Phoenix Downtown. The hotel—which was originally intended to be used as commercial space—is airy, contemporary and full of touches that make it Westin (the signature white tea scent that fills the air and the incredible Heavenly beds that occupy each room, for instance). Each guestroom offers stellar views of city lights and mountains in the distance through its floor-to-ceiling windows, though the gorgeous rooms are difficult to distract from, thanks to modern furnishings, leather-and-wood headboards, and bathroom spaces with dual shower heads and, in some cases, stunning soaking tubs.
In addition to all the eye candy that Westin Phoenix Downtown offers, it is also home to Province, an American restaurant with South American and Spanish influences. The first-floor restaurant dishes up farm-to-table cuisine in a cool, contemporary atmosphere, consistent with the rest of the good-looking resort. In the space, bright pops of fuchsia meet dark, masculine furnishings. Natural details also grace the dining space, like the moss wall that greets guests as they enter Province and the branches that hang from the ceiling.
The Province menu is divided into six sections: snacks, raw plates, soups and salads, sharable items, main dishes and veggie sides, including potato frites made with fingerling potatoes. While the snacks section has the lackluster spring squash taquitos (which are $3 a pop for a small taco with a slivers of squash), the raw menu includes the fresh and flavorful farm-raised shrimp ceviche. The petite dish is rounded out with tomatillo salsa, jicama and bright, refreshing grapefruit segments.
There is another winning dish among the group of soups and salads: the tortilla soup. The dish is presented as a small bowl full of avocado, tortilla strips and roasted chicken and a small pitcher of thick, creamy broth that is to be poured on top. The thick and spicy broth makes the soup a table favorite, and a tasty diversion from other more liquid-y chicken tortilla soups. Another zesty option is the goat cheese fondue with smoked onions and oven-dried tomatoes and sided with herbed crisps. The veggies are sweet against the warm, spicy cheese, a delectable flavor combo. However, the dish could use a greater variety of dippers outside the herbed crisps.
The entree lineup has items that stay true to the restaurant theme (like papardelle pasta with piquillo peppers and Spanish olives and the barbecue lamb with chorizo) as well as some dishes that stray (like a cheddar burger on a brioche roll and the pan-seared Hawaiian tuna). The slow-cooked organic salmon highlights both Spanish and Asian influences. The delicious fish, with a perfectly crisped exterior, is topped with a drizzle of sweet and spicy chile-miso glaze. A fresh bed of edamame and spinach rounds out the scrumptious seafood offering. Though on the dry side, the boneless “brick” half chicken has a delectable honey glaze and a black bean jus—again, resulting in sweet and spicy goodness.
Province excels at providing a unique, diverse dessert menu, full of tasty treasures. The fruity house-made sorbets are a great summertime pick (if you’re lucky, you might be served a scoop while in the Westin lobby on a hot day), though the peanut-butter-and-chocolate flan sandwich makes for a more decadent end-of-meal. The latter dessert features two layers of creamy flan surrounding a crispy meringue center and is crowned with a scoop of chocolate sorbet. For a peanut butter cup enthusiast, it doesn’t get much better. The intriguing spring squash cupcake, with molasses-cream cheese frosting and a side of honey ice cream, serves up just a dash of sweetness. All that’s left to do is sip on Province’s cinnamon-y sangria and retreat to that Heavenly bed that awaits a few floors up.