Executive Chef Gregory J. Wiener of Top of the Rock, Marriott at the Buttes. 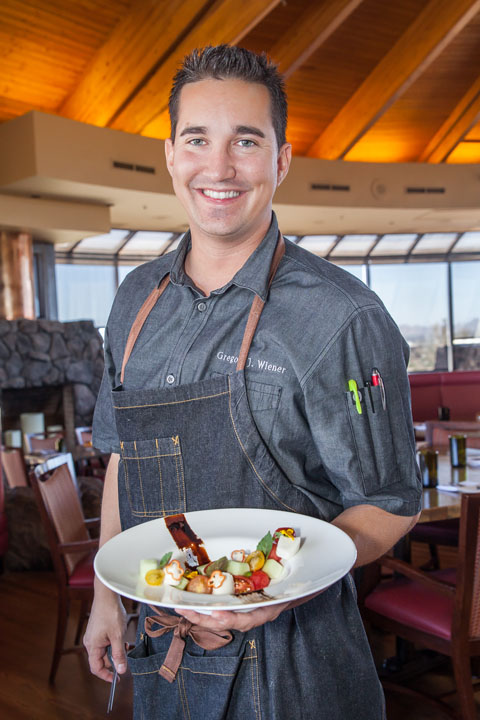 AFM: You are Director of Restaurants at The Marriott in Tempe/Phoenix. What are you responsible for?

GW: I have dual responsibilities. I’m in charge of all culinary that comes out of the Buttes. I’m also in charge of the front of the house operations, the marketing, and keeping it moving in the right direction. We have updated the table tops, china, silver, glassware and the beer and mixology program. I would be remiss If I didn’t say that I have a very talented team, and they make me look good and make me proud every day. Thank you Shelby, Aalt and Chef Chris.

AFM: The man cave at your house is cool. Name a few of your favorite sports/teams that you watch on TV.

GW: I am a total homer. I am a Green Bay Packers freak, I like the Milwaukee Brewers and the Bucks. I love to watch MMA. I just went to a couple live events in Vegas. But Packers football comes first on Sunday. 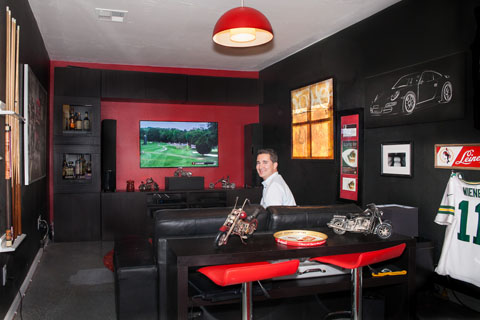 AFM: You started working in the restaurant business in your father’s restaurant in Wisconsin. Give us the story from there.

GW: I started working very young. The entire family worked at the restaurant. It was called the Garden Restaurant at Timber Terrace Golf Course in Chippewa Falls, Wisconsin.

AFM: Where did you attend culinary school?

GW: I went to culinary school when I was 19 at the CIA. I was armed with some terrible knowledge that my father taught me. Having cooked for several years at the time I thought that I was going to be years ahead of the other students. But I quickly found that what my dad was teaching me was mainly short order cooking and how to take as many shortcuts as possible without putting out garbage food!

AFM: It must have been an eye-opening experience moving from a farm town in Wisconsin to New York City.

GW: There was much more culture, diversity, and food than I ever imagined. After I finished school I moved back to Wisconsin. I took a chef/kitchen manager position at one of the nicer restaurants in town. There was a small community college that had a terrible culinary program, so coming from the CIA they thought I was the smartest culinary mind in the world. I quickly found that I had not enough experience to run a kitchen or deal with cooks that were much older and had more days on the line than I did.

I then took on a head banquet chef position at the local convention center/hotel. They promoted me to the executive chef at Fanny Hill, a four-diamond bed and breakfast/dinner theater. The initial staff hated me, as I was too young and they all had been cooking longer than I had, but I had something they didn’t. I had a ton of drive. The first staff turned over quickly but then I hired a new staff and a bunch of misfits that would listen to me. To this day, I still maintain contact with all of them.

AFM: Did you ever get fired?

GW: Yes! After a year at Fanny Hill, I was fired for being too young, cocky, and making bad decisions. It was the best thing that ever happened to me. My staff walked out after they heard the news, it was quite emotional. 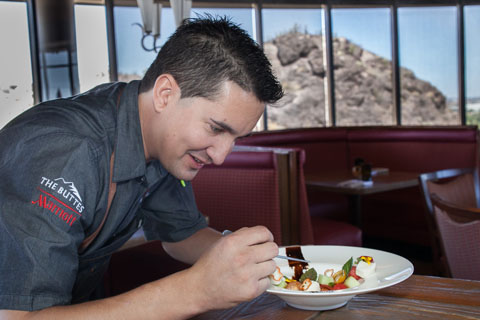 AFM: You are respected by your peers in the Valley. We want to hear a story about cooking and drinking with some of them. Yes, name names.

GW: A gentlemen never kisses and tells. It is well documented that chefs can party and I will leave it at that! I will tell you that I have been fortunate to cook with some of the best here in the Valley. Last year we did our summer series with Beau Mac, James Porter, Aaron May, Stephen Jones, Mel Mecinas, and Lenard Rubin at Top of the Rock. It was a great experience for our guests to be exposed to that amount of talent. We hope to do it again next year.

Crazy story: One random night I was at Posh with Audge enjoying Josh Hebert’s amazing food and I look up and Jeff from Crepe Bar was there at the bar just about to leave. Then Bernie Kantak of Citizen Public House and The Gladly and walks in. Next Charles Kassels, from El Chorro shows up in his whites. We decide to move and pull up next to him at the bar since he and I did a dinner together on the Saturday prior. So we are eating and then someone scares the crap out of me from behind and it is Chef Beau Mac. Bartender Jason Asher shows up and sits next to Beau to talk some shop. That was a fun night.

AFM: What was it like working for Chef Samuelsson at Aquavit, in Minneapolis?

GW: It was a great experience. I went in on a Saturday and worked the fish station. Next thing you know I am living with some of the cooks in uptown Minneapolis, since they were all from Sweden and there to learn from the master. There were several of us in a small, one-bedroom apartment. I slept in a closet floor in a sleeping bag. We made next to nothing for pay, but we stayed up day and night talking about food, coming up with new dishes. I was being molded even though I didn’t know it. The long hours and constant fear of getting yelled at was stressful. Roger and Marcus were tough but I learned they were only really tough on the cooks that they respected. I was there for about a year and a half. Those were the best and worst days of my career.

I then went to the Minneapolis Marriott Southwest. I almost quit the first week, especially after working with Marcus at Aquavit. Then I took a promotion in California at the JW Marriott Desert Springs Resort, where I met Chef Oliver Reschreiter. He is the second chef to completely change me. He made me see things differently. He taught, me how to teach, manage, control, expect and rise to the occasion. From there I took several promotions and stops across the United States. I eventually ended up in Phoenix, where I am now the Executive Chef and Director of Restaurants at the Buttes Marriott Resort. 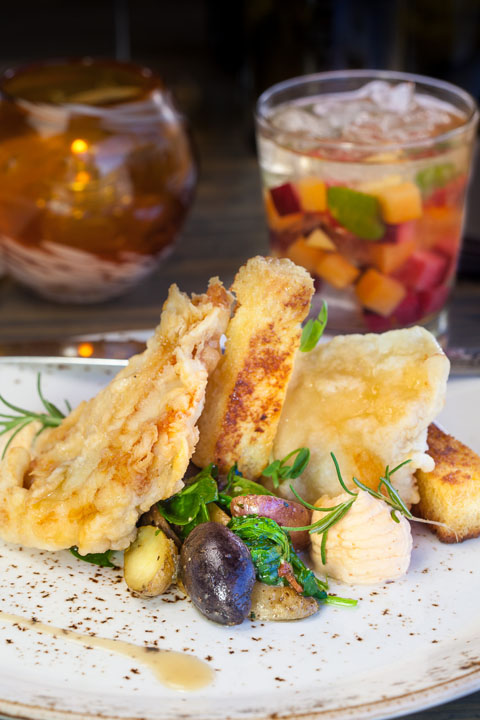 AFM: Tell us about the beautiful pastry chef you live with.

GW: Audge is my main squeeze. She is the head Pastry Chef at the Sanctuary Resort and Elements Restaurant with Beau MacMillan. We have been together three years now. We have four crazy dogs, two each. She totally balances me out, I am a little hyper. We love to entertain. We have all kinds of fun activities to do around the house, from a pool table, foosball, darts, slot machines, and a hot tub, never a dull moment.

AFM: Describe a recent meal that the two of you cooked together.

GW: We did a small Italian night just the two of us. Fresno chile eaviolis, two other types of pasta, three sauces. Everything was handmade. We didn’t realize how much food we made until it was over.

AFM: If you could dine in any restaurant in Arizona, where would you go, and why?

GW: Last time I went to Binkley’s in Cave Creek, Kevin and his staff killed it. It was a truly a great experience, everyone who loves food should do it once. He needs to win that damn Beard award already.

I love food so much. I am fortunate that I have tried so many of the local spots and that my job allows it to happen. I need to check out Urban Vine by Mod, we go back a ways and I love Chef Michael O’Dowd’s food.

AFM: Who has been your career mentor and why?

GW: My food mentor was Marcus Samuelsson, my career mentor was Chef Oliver Reschreiter, but my life mentor would have to be my parents. They instilled the proper values into me and taught me that hard work pays off.

AFM: What are a few of your favorite ingredients? 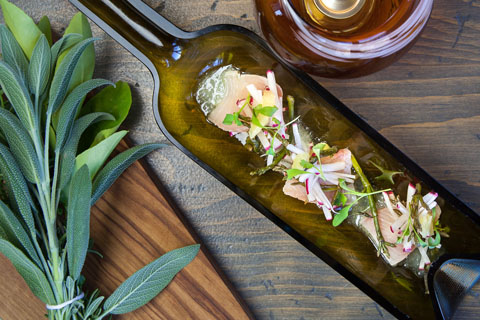 GW: In my man cave, I have plenty of Scotch or bourbon or anything you could for. But if I want to go out then it would be Posh on Tuesdays for Ramen.

AFM: If your cooking career ended tomorrow, what new career would you choose?

GW: I think my life would end.