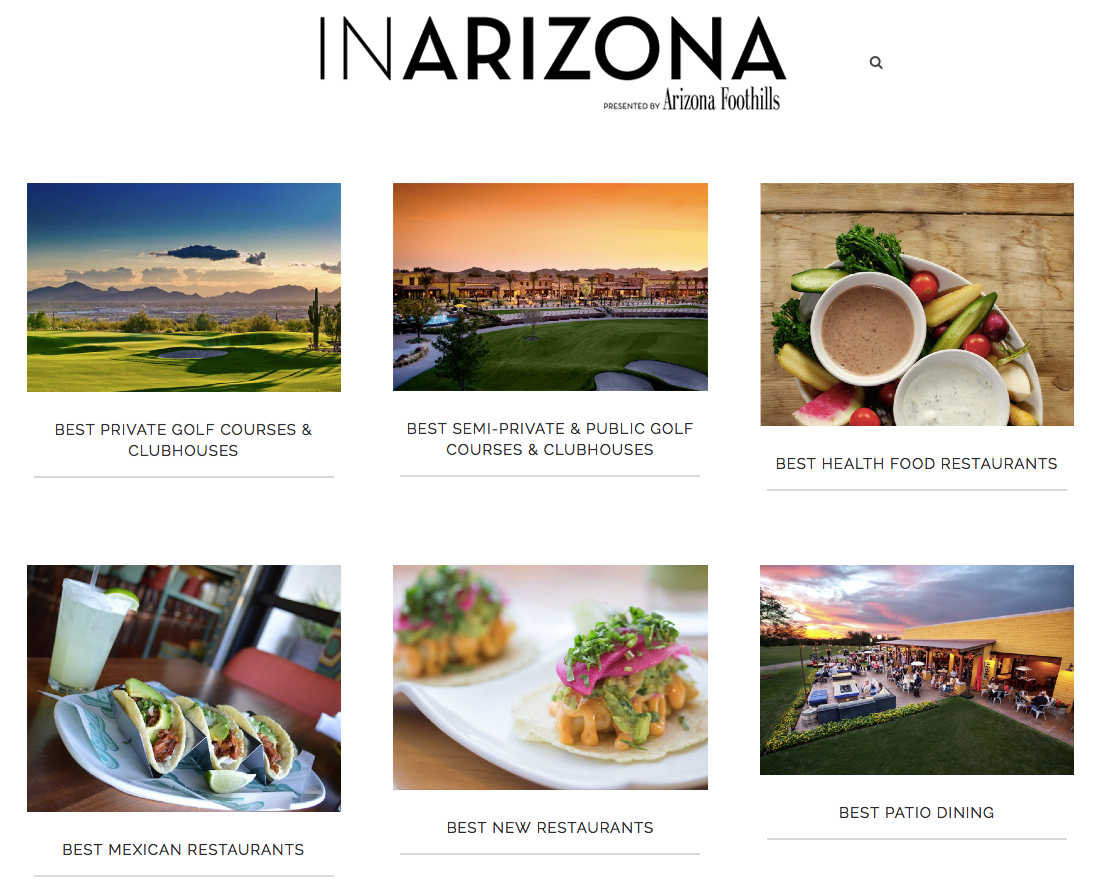 August 9, 2016 (Scottsdale, AZ) - Arizona Foothills, the Valley’s number one authority on luxury lifestyle, has recently seen a 250% increase in online traffic over the past year. The notable jump can be attributed to AZFoothills.com micro-site of InArizona. Each year, Arizona Foothills Magazine releases a special thirteenth edition tourism-focused book InArizona. The 130+ page issue highlights Arizona’s crème de la crème, targeting state forty-eight visitors throughout the calendar year. The web component of InArizona is hosted on AZFoothills.com which is one of the top 10,000 most visited website in the United States. Recipients of the InArizona print publication are consistently returning online to reference content for current and future Arizona visits.

The InArizona print publication premieres in January of each year, just in time for some of the Nation’s largest and most publicized events hosted in the Valley of the Sun. Copies of the collectors edition issue can be found in VIP areas of Barrett Jackson, Phoenix Open VIP Skyboxes and Suites, NCAA Final Four events along with a host of other prestigious happenings. In addition, more than fifty thousand copies are available at the Valley’s top luxury resorts, Sky Harbor airport, private air hangars, premium shopping destinations, Arizona CVBs, and more. InArizona editorial includes elite experiences as chosen by Arizona Foothills tastemakers along with choice content for every palette and predilection from dining and nightlife to resorts and spas to shopping and adventures.

AZFoothills.com sees more than 200,000 unique visitors per month and targets visitors with the same InArizona print editorial content on the micro site. The micro site remains live online for the entire calendar year allowing AZFoothills.com to provide more reader service to its primarily elite and affluent tourism driven demographic. AZFoothills.com consistenly ranks on page one of Google for many commonly searched tourism focused terms including “best restaurants in Arizona", “best of Arizona”, “best shops in Arizona”, and “best shopping in Phoenix”. InArizona content is also shared through AZ Foothills social media platforms, which rank number one among all media outlets in Arizona with more than 300,000 followers combined.

“Arizona Foothills is the most trusted luxury brand in the Valley for more than nineteen years and we reach the most affluent visitors better than anyone else with InArizona," states Michael Dee, AZ Foothills President and Publisher. He went on to say, "Our increase in online traffic over the past year proves that readers are choosing Arizona Foothills for the very best information concerning Arizona by consistently coming back to our micro site on AZFoothills.com."

Don’t miss your opportunity to share your message with thousands of readers in InArizona 2017. To reserve space e-mail sales@azfoothills.com.