For years, Mastro’s restaurants have long provided popular Valley dining destinations, especially for special occasions. Ocean Club at Kierland Commons in Scottsdale, in particular, dishes up out-of-this-world seafood–as well as a prime eats for non-seafoodies.
For starters, Ocean Club’s bread basket shouldn’t be passed up, which will be apparent after sinking your teeth into the pretzel bread. Next up, the vanilla-battered shrimp will win over even those who aren’t huge fans of seafood. First of all, the shrimp are massive (you have to see them to believe them) and the vanilla offers just a hint of sweetness. During our visit, burrata with tomatoes, basil and a balsamic drizzle was a special–and it was divine. The burrata basically melted in our mouths, the tomatoes were plump and juicy and the basil and balsamic added a hint of sweetness.
A new addition to the Ocean Club menu, is the Clear Lobster Roll, part of a sushi lineup designed specifically for Mastro’s restaurants by Chef Angel Carbajal of Nick-San in Cabo San Lucas. The aforementioned roll spotlights spiny lobster tempura, mango, avocado, spicy mayo and masago  rolled with fresh greens and served with Chef Angel’s signature lobster sauce and curry oil. The yummy roll has a spicy kick, a nice contrast from the sweet vanilla-battered shrimp starter.
The side dishes are as big of stars as the main dishes at Ocean Club. For example, the lobster mashed potatoes. The signature menu item comprises rich, buttery potatoes that are chock-full of sweet lobster (Ocean Club certainly doesn’t stiff you on the amount of meat). Another winner is the gorgonzola mac and cheese. The side dish is a grown-up version of the classic comfort food and downright addicting.
Not a seafood fan? No worries. Ocean Club has many land-based eats as well that will more than tempt the taste buds, from rib eye to New York strip to chicken to lamb (and more).
For dessert, do.not.miss the amazing Mastro’s Signature Warm Butter Cake (see the upcoming June 2012 issue for the recipe!) The cake, which is warm and soft in the center and crispy on the exterior, is sinful–but after one bite, you won’t care. It is too yummy to miss, especially when prepared with the side of freshly whipped cream. Yup, diners are treated to an entire bowl of whipped cream, in addition to the cake. Diet, who? www.mastrosrestaurants.com. 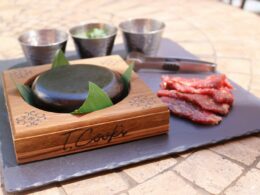 What to Eat at T. Cook’s Right Now 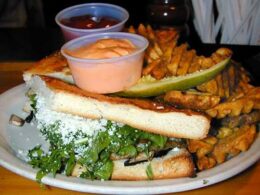 Okay, so it’s Friday. The last day of the work week and, for many, the beginning of the…
byMelissa 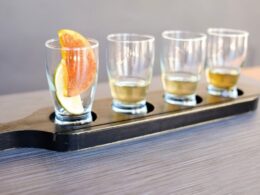 Macayo’s is a culinary treasure in the Valley. Since 1946, it has been dishing up authentic Mexican eats–and…
byMelissa 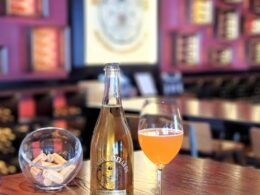 Merkin Vineyards wine bar in Old Town Scottsdale is excited to announce it will now serve brunch every first Sunday of the month.
byTyler Hollis