A Taste of The Mission at Minder Binder

For more than 30 years, that iconic big red barn in Tempe, Minder Binder restaurant, was a local landmark. After being abandoned in 2005, the Bell family (behind the super-popular San Tan Flat Grill & Saloon in Queen Creek) purchased the property in 2012 and has recently re-opened it with a new name (The Mission at Minder Binder), a fresh menu yet the same charm that made Minder Binder such a hit for all those year.
When it comes to deciding whether to dine inside or our, diners can’t go wrong. The outdoor patio has plenty of space and gorgeous fountains–plus, a casual grab-and-go spot for those who want quick counter service (though half the patio still has sit-down service). Inside, eyes are treated to 7,000 square feet of memorabilia decking the walls and hanging from the ceiling from the 70’s, 80’s and 90’s. Think pop culture artwork, old school phones, funny sculptures–even the genuine oversize Zeus prop that was featured in the famous chariot race in “Ben-Hur.” Kids will especially delight in all the fun props. (Speaking of kids, The Mission at Minder Binder does not have high chairs, though the atmosphere and menu is kid-friendly. So be sure to bring a portable high chair seat, if needed.)
From burgers to ribs to pizza (and plenty of beer), The Mission at Minder Binder dishes up hearty, comforting eats for the whole family. To start, the cheese curds are delicious. Not overly greasy, the curds are crispy and full of gooey cheese–a real crowd-pleaser. You can even order them with jalapenos. The rack of ribs–which is by far large enough to feed a party of two–is coated in finger-licking-good sauce and the tender meat falls right off the bone (no knife needed). We’re told the ribs are actually the same recipe as those at San Tan Flat, a menu item that was so popular there they they needed a special kitchen to whip up just ribs.
The pizza is the real showstopper at The Mission at Minder Binder. Kristen Bell, owner of The Mission at Minder Binder, knows what she is doing when it comes to ‘za. She opened the successful The Dough Trader Pizza Company in South Dakota in 2011. Bell integrated The Dough Trader’s trademark pizza dough–using their very own sourdough starter, the same used since the 1880’s–into The Mission at Minder Binder’s kitchen. The kitchen currently holds six Blodgett large pizza deck ovens, some of the largest pizza ovens in town. The pizza is the perfect balance of crisp around the edges, but a little more soft and chewy where it needs to be. The King Leonidas is the table favorite, towering with grande (yup, super-huge) pepperoni and fennel-infused sausage. Have leftovers? Bell recommends popping them in a hot pan with a little olive oil for a few minutes. theminderbinder.com. 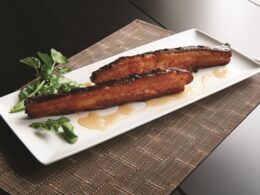 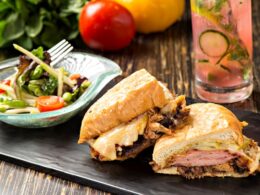 Labor Day is just two weeks away, so it is time to plan your feasting plans accordingly. Check out these Valley dining deals and specials for the holiday weekend.
byMelissa 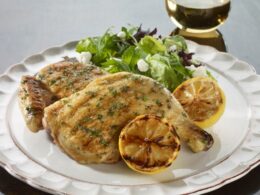 The House at Secret Garden 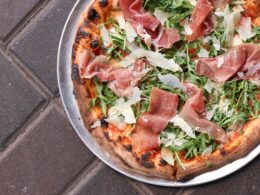 Wink 24, now open at Biltmore Fashion Park in the space that once occupied UNION, brings with it all the makings a great dining spot.
byMelissa