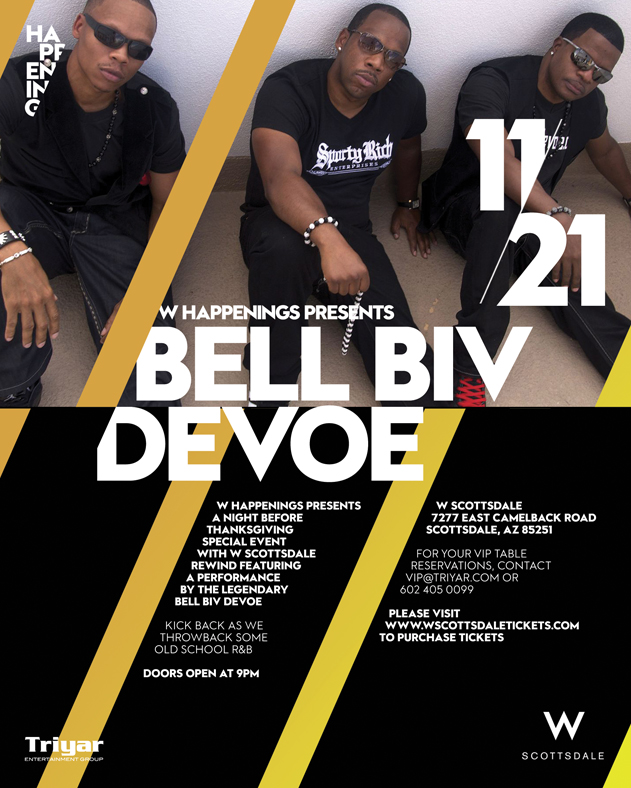 W Scottsdale Rewind launched in March 2012 with hip-hop classic Rev Run of Run D.M.C. performing a special DJ set for fans. This Thanksgiving Eve, W Scottsdale Rewind will bring a performance by Ricky Bell, Michael Bivins and Ron DeVoe, better known as Bell Biv DeVoe (BBD) that will take place on a stage in the WET pool on the second level WET deck, providing guests with the classic hits including “Poison,” “Do Me!” and “BBD (I Thought It Was Me).”

Bell Biv DeVoe received fame from their unique collaboration of hip hop beats, R&B harmonies, and street-styled dance moves. In 1990, their debut album, Poison sold over four million copies which garnered them the platinum title and number one spot on Billboard’s R&B/Hip Hop chart.  Their success continued with the top three single on the Billboard’s Hot 100 chart, “Do Me!” and popular hits like “BBD (I Thought It Was Me)” and “When Will I See You Smile Again?”