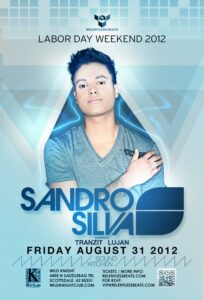 Sandro Silva is one of Holland’s most promising new production talents. He is known for his broad, energetic sound that is so perfectly combined with a musical depth acquired by his years of piano study. Starting his career in dance in 2006 at the age of 15 (!), Sandro Silva has already released tracks on Secure Recordings, Spinnin’ Records and Laidback Luke’s Mixmash label.

It is through Laidback Luke’s coaching and support, that Sandro was able to develop his DJ and producing skills at such a rapid pace. His talent has certainly not gone unnoticed by some of the biggest, most accomplished artists in the scene: His release, ‘Prom Night’ was featured as an Essential Choice on Pete Tong’s BBC radio show. Even the biggest DJ of our time, Tiësto, has personally expressed his recognition and support of Sandro’s talent!

For more information or to purchase tickets for this event: www.relentlessbeats.com