Reminisce the 90’s at These Valley Concerts

If you’re longing for days gone by, there’s a musical fix in your near future. Phoenix will be home to a variety of throwback concerts of groups you probably didn’t even know were still touring. These upcoming concerts will likely strike a chord of nostalgia in you and we’re positive you’ll still remember every word. Take a look below at some of the most sentiment-inducing shows to hit the Valley over the next three months.

July 19: The Goo Goo Dolls
If nostalgia had a sound, it would be The Goo Goo Dolls. With the breathy sound of lead singer John Rzeznik’s voice, The Goo Goo Dolls became one of the most popular alternative rock bands of the 90’s and it would be impossible to forget some of their hit singles like “Name,” “Here Is Gone,” “Dizzy,” “Slide” and their biggest hit “Iris,” which catapulted the group to fame after it was featured in the movie The City of Angels. Tickets HERE.

July 21: The Offspring
For those who were convinced they were anything but a trend, there was The Offspring. With a sound at times reminiscent of Nirvana, this California band hit big in the 90’s with singles like “Smash” and “Pretty Fly (For A White Guy),” the latter of which gave us a humorous and unforgettable video full of whiny girls asking “give it to me baby.” Tickets HERE.

July 25: Modest Mouse & Brand New
If the words “all right, already, we’ll all float on” weren’t stuck in your head daily throughout 2004 then you may not be familiar with Modest Mouse and their hit single “Float On.” They’ll take the stage in Phoenix with Brand New, an alternative band born in 2000 that you may remember from hits like “Jude Law and a Semester Abroad” or from the creepy cover of their 2006 album, The Devil and God Are Raging Inside Me. Tickets HERE.

July 27: New Edition
No one can forget the poppy 1983 single “Candy Girl” or the smooth “Mr. Telephone Man” from the young, New Edition. As the group matured, so did their sound, entering into a more R&B and jack swing era. One of the members, Michael Bivins, eventually went on to give the most commercially successful R&B group of all time their big break—Boyz II Men. For that, we are thankful. Tickets HERE.

August 2: Weezer & Panic! At The Disco
Quirky and at times humorous, Weezer has plenty of tunes to belt out, from their early hits like “Say It Ain’t So,” “Buddy Holly” and “Undone (The Sweater Song),” to later hits like “Beverly Hills,” which practically became an anthem for So-Cal dreamin’—sort of. They’ll be taking the stage with Panic! At The Disco, the first band signed to Fall Out Boys’ lead singer, Pete Wentz’s record label. With a sound similar to Fall Out Boy, Panic! made a name for themselves with quick lines, poppy sounds and unique song titles like “Lying Is the Most Fun a Girl Can Have Without Taking Her Clothes Off” and “The Only Difference Between Martyrdom and Suicide Is Press Coverage.” Tickets HERE.

August 26: 98°
During the late 90’s, boy bands were all the rage and 98° was in the middle of the heartthrob sensation, emerging onto the pop scene in 1997 with “Invisible Man.” From there, the group of four released major hits like “Because of You,” “My Everything” and the most popular song to burn onto a CD for your middle school crush, “I Do (Cherish You).” Did we mention O-Town, Dream and Ryan Cabrera will be there too? Tickets HERE.

September 13: Counting Crows & Rob Thomas
Don’t it always seem to go that you don’t know what you got till it’s gone? Counting Crows said it first and it couldn’t be more true. With images of paved paradises and trees in museums, their hit “Big Yellow Taxi” is one to not be forgotten, along with their breakout single “Mr. Jones,” that had us singing sha-la-la-la-la-la all through 1993. Joining them in Phoenix is Matchbox Twenty and if you happened to be a fan of theirs, then you probably followed their lead singer Rob Thomas into his solo career where you likely remember his hits like “Ever The Same” and “Lonely No More.” Tickets HERE.

September 15: O.A.R.
Did O.A.R. ever figure out how many times they can break till they shatter? Maybe not, but the Maryland-born rock band went from dorm room hobby to mainstream sensation with singles like “That Was A Crazy Game of Poker” and “Shattered (Turn The Car Around).” Tickets HERE.

September 24: Blink-182
At a time when Dickies shorts, skater shoes and gauges were all there was, not fitting in was the best way to fit in, and no one did it better than Blink-182. The San Diego-born pop-punk band hopped onto the scene in 1993 and inspired rebellion in all of us. With images of seductive nurses snapping on latex gloves and creepy goth mansions filled with spiders still dancing in our heads, Blink-182 always knew how to make an impression. Whether you were bobbing your head to “All The Small Things,” running around asking “What’s My Age Again?,” or emotionally connecting with “First Date,” Blink-182 was—and still is—the punk band we can’t look away from. Tickets HERE.

Photo: Cover art for Blink-182’s album, Enema of the State. 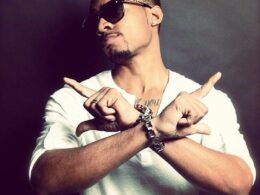 Local rap and hip hop artist, LordPHX, like his name suggests, is on the rise. Writing music since…
bySuzanne Koch 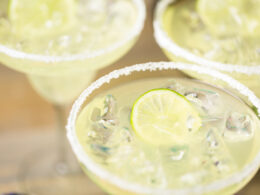 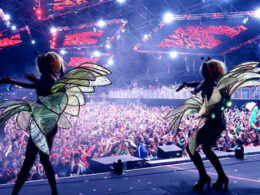 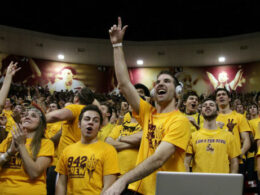 by: Amanda Savage DJ Munition of Arizona State University prepares for the national finale of the Campus DJ…
byAmanda Savage