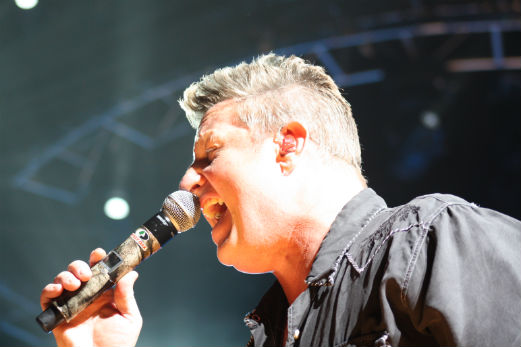 Story and photos by: Anne-Marie Pritchett

Donning the closest thing I have to cowboy boots, I ventured into what I thought was going to be a sea of drunken crooners practicing up for the impending jamboree, Country Thunder. But this was not that type of show. The fans love them some The Band Perry and Rascal Flatts. Tonight, the rowdy is mellow. Instead of gittin’ rambunctious and sweating beer by the third act, the crowd swooned to the sweet sounds of summer, sippin’ on water and Bud Light Lime tallboys.

It was the perfect mom/daughter date night.

Winner of “The Voice,” Cassadee Pope started off the toasty evening singing to a pretty large crowd for a 7p.m. opening act. This isn’t her first rodeo, though. The newcomer worked the crowd as she interacted with the fans, pointed and waved that Snow White wiggly-finger wave the country stars tend to get in the habit of doing. Her proudest moments were the cover of Miranda Lambert’s “Over You,” and Pope’s own first single, “Wasting All These Tears,” set to be released on her debut album this October.

The girls in the crowd, decked out in flannel shirts paired with semi-short shorts and boots, patiently waited for The Band Perry to make their big entrance. They kept themselves busy taking selfies with the BFs and BFFs, drinking cans of, you got it, Bud Light Lime.

The lead singer of the sibling trio, The Band Perry, Kimberly Perry should be appointed Queen of the Mardi Gras Parade because her animation, determination and Richard Simmons-like energy got the crowd going. Girlfriend brought this cabaret to life from the get-go. Perry’s brothers, Reid (bass guitar and background vocals) and Neil (mandolin, background vocals) had some fun with their sis, too. Stylin’ with Brit-pop haircuts and leather pants, the boys kept up and played the hell out of some instruments. As the bright, Broadway-style stage lights beat to “You Lie,” the Perrys’ coordinated dance moves delighted the die-hards. Each song, including “I’m a Keeper” kept beating on as night fell.

While the crowd kept cool for the most part thanks to the over-sized ceiling fans above, I had to ask myself “Can someone get these guys a towel?” because they were sweaty up there onstage. After a shout out to radio for bringing us all together tonight, The Band Perry performed a few covers that the tame crowd seemed to approve of – indie-pop band fun.’s “Some Nights” and Queen’s “Fat Bottomed Girls.” I caught a brief whisper of Rush influence during The Band Perry’s popular diddy, “Better Dig Two,” but then it faded quickly. Word is they have some classic rock influences, and I caught a small sampling.

One of the highlights of the night happened when they turned down the sound and let the crowd harmonize “If I Die Young” under a calm Arizona sky.

When the large sheath that hung mysteriously between sets fell to reveal the headliner, Rascal Flatts, I thought the crowd was gonna go crazy. But after a few initial large, hot, loud stage explosions, the boys of the band simply sauntered out singin’ their popular cover of Tom Cochrane’s hit, “Life is a Highway.” The crowd was into it, swaying and singing every word to each other. The good ol’ boys started slow; maybe they’ve done this too many times recently. Lead singer, Gary LeVox, who later sang into a camouflage mic, walked the stage and waved that same horizontal finger wiggle that Pope perfected. While that man can sing and bandmates, Jay DeMarcus (bass, piano, banjo) and Joe Don Rooney (lead guitar, vocals), can rip their respective instruments, there were two stars of the show that shone brighter than the rest. Louisiana native and fiddling champion, John Jeansonne, and the ever-changing colorful screen projection backdrop that changed with each song to fit the mood and liven the room. Jeansonne’s sly charm flirted with the teenage girls as the Cajun’s fiddle danced through the pavilion twirling the girls’ moms.

A little past mid-set, after “Banjo,” “Love You Out Loud” and big-time hit, “What Hurts the Most,” a little sunshine returned to the graying stage. Cassadee Pope and LeVox innocently flirted through a few duets – “Easy” and “I Won’t Let Go.” I don’t know if it was the faithful fanship, the waxing moon or Pope’s cuteness, but the trio got giddy after LeVox said, “I mean, you only won ‘The Voice’ and stuff and stuff and stuff,” as the two playfully bantered while trying to harmonize all off-key, on purpose.

Enter a new side to the country boys – there’s the rascal I was hoping for. From that point on, the otherwise seemingly bored group of guys got into it and let humor lighten the load.

DeMarcus described LeVox to be “singing in the clouds,” right before LeVox said Don Rooney “looks like he stepped out of GQ; smells like frosted flakes when he walks, too.” The rest of the show was higher energy and light-hearted, good ol’ fun for the fans.

And, in the end, there was confetti. Country fans love that confetti.

Yeah, it’s commercial country, but who cares; if the fans love it, let them love it. Rascal Flatts kindly, like gentlemen, opened the door for their fans, invited them in to play and gave them the feeling they came for – freedom for a minute from the day-to-day.

Photos from the show: