Nestled in the heart of Phoenix’s warehouse district lies a resurrected Last Exit Live, which since re-opening it’s doors at this venue in 2013, has quickly established itself as a deep pocket for local music and touring acts. Keeping much of the same dive lounge vibes as its predecessor (Ruby Room), Last Exit Live’s vintage bar and antique décor cultivates a funky and retro aura that contagiously spreads throughout the crowd.

Wednesday night, the venue fostered the sounds of old surf music and 1960’s garage band jams– including the Seattle La Luz. Man Hands, Numbats, and Freaks of Nature warmed the stage while members of La Luz swayed with the crowd.

I had the pleasure to sit down with these four ladies, most of whom met while playing in other bands, to talk touring, traveling across country without air conditioning and crowd surfing.

The first thing the group gushed about is the top-notch quality of the sound system and the hospitality of the entire staff at Last Exit Life. The place has really outdone itself in harvesting a welcoming atmosphere for all visiting acts.

Drawing inspiration from bands like The Adventures, there’s a hypnotic pulse of catchy harmonies that come as effortlessly as blinking, that when the ladies take stage the energy shifts and the entire room is narcotized by that light, poppy goodness that drifts through each song all sweet and easy – and the fuzzy nostalgia will leave you spellbound for more. 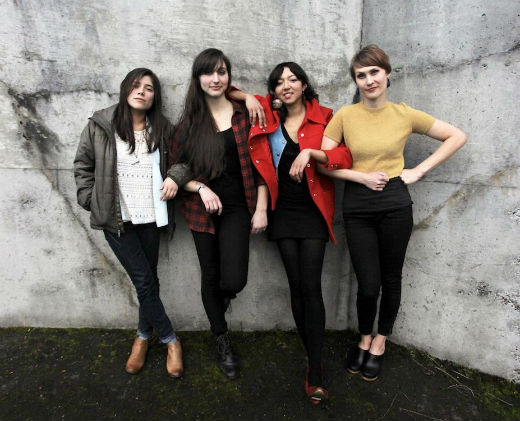 When asked to comprise their dream 3-act concert, the girls were quick to collaborate for an epic show beginning with The Growlers, followed by Tina Tuner and Bo Dangle to shred guitar, and an Elvis and Buddy Holly mashup to close. Of course The Beach Boys would play the after party.

Frontwoman/guitarists, Shana Cleveland is the main songwriter creating poignant, pastoral songs while shredding the guitar, Alice Sandahl’s dance moves behind the keyboard are unparalleled, drummer Marian Li Pino’s rhythm is penetrating and Abbey Blackwell bass-playing, smooth as butter. The ladies next album, It’s Alive, is to be released in October. Though the group describes their vibes as “fun and fun-loving,” this album is a bit on the creepy side. They may seem all sweet and innocent with their humble, flawless harmonies but be prepared to have you socks rocked off.

Literally. Phoenix is thirsty for fresh venues to host inspired musicians like La Luz. Don’t mistake Last Exit Live as another dive bar with karaoke. This is a hub for talent. That rare moment when you see an undiscovered artist live for the first time andthey instantly become your favorite band – is just an average Wednesday night at this  joint. If you haven’t had the pleasure, check out the next show. The beer is cold, the people are refreshing and the bands can rock.