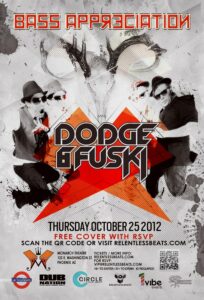 If you haven’t heard of Dodge & Fuski yet, you soon will as these guys are on the button. Since the beginning of 2011 the dubstep and drumstep duo racked up over 3 million views on Youtube and have been championed by Radio 1, 1 Xtra and the world’s leading YouTube dubstep channel UKF.

Describing themselves as self-confessed “Westcountry layabouts who drink too much tea” the Bristol duo are anything but. They are signed exclusively to the fresh and exciting label ‘Never Say Die Records’ home to artists such as Foreign Beggars, Freestylers, 501, SKisM, Zomboy and more. They play regularly around UK and Europe and have recently completed a tour of Australia, New Zealand and Canada.

Alongside standout tracks such as ‘Come Again’ and ‘Pornstep’, they have also made a name for themselves remixing the likes of DEVolution, Deekline, Wizard, Ed Solo, Blatta & Inesha and DJ Assault. twisting up dubstep, electro and D&B flavours to create a fresh contemporary sound.