Home Artists & Interviews Above & Beyond
ShareTweet

There are DJs who can rock a party, a club, a festival. And there are acts that can write songs that will bring out the goose bumps in you. But there’s only one group that can do both: Above & Beyond. This three piece have remixed Madonna, won Essential Mix of the Year, and played to one million people in Rio de Janeiro. More importantly they’ve written songs with the power and the melody to en-trance that one million-strong crowd, many of who were singing along, word for word.

Above & Beyond make music, pure and simple. That music happens to be electronic. And it connects. “We’re a group,” says Above & Beyond founder Tony McGuinness. “And what we’re trying to do is exactly do that, connect with people. You try and describe something in your own life, but in a way that will resonate with other people. When you see people singing along as passionately as they do, I guess you’re getting it right.” This makes Above & Beyond unique, not just in trance, but in popular music as well. “We like to think of ourselves as songwriters first,” says Paavo Siljamaki, who with Jono Grant makes up the trio. “That’s our approach to music. The most challenging thing is to write a song that really touches the listener.”

Above & Beyond are not people who like to do things by halves. Witness their latest release, ‘Anjunabeats 100’ – a collection of the very best tracks from their universally respected Anjunabeats label. The album also includes a DVD documentary, which captures the two shows the band played over Christmas and New Year 2007. First they travelled to Goa, India, the spiritual home of trance and their label Anjunabeats, to play an unforgettable sunset set at an open-air beach festival. Days later they flew to Rio de Janeiro, Brazil, another stronghold of the international trance sound, to headline a New Year’s Eve show on Barra de Tijuca beach – in front of one million people. Dressed in the traditional white of Brazilian New Year, Above & Beyond captivated Rio with a set that was truly magical. Many of that crowd were fans who had travelled from all over Brazil.

“It was life-changing,” says Tony. “It was amazing to look out and see that many people. In some ways it was too big to comprehend!” From club gigs in Eastern Europe to major festivals like Coachella in California, Above & Beyond have the ability to entrance audiences. Their music has grandeur and melody, but it’s edged with steel too. There are dark shadows but sweet moments too. And it’s bigger than any genre. Trance is too small a word for what they do.

All three are experienced musicians who know their way around a studio without the need for engineers. Tony McGuinness was marketing director for Warner Brothers Records – but for years previously was the guitarist/songwriter of cult indie band Sad Lovers & Giants. Asked to organize a remix of Chakra’s ‘Home’ in 2000, he joined together with Jono Grant and Paavo Siljamaki – and Above & Beyond was born. “By coincidence we ended up putting three individuals with complimentary and different talents into the mix,” says Tony. Pete Tong quickly latched on to their talents: that debut remix for Chakra quickly reached Number One on the club charts. It’s been a rollercoaster ride ever since. 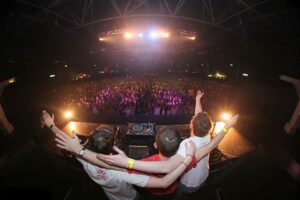 Jono Grant first discovered dance music when he borrowed his brother James’s cassette of Paul Oakenfold’s classic Goa mix – and fell in love with its sweeping melodrama. He was already training as a classical pianist and played guitar. But that mix inspired him to start building his own studio, taking on part time jobs to buy bits and pieces of equipment. “I managed to save up enough money from mowing the lawn to buy a drum machine,” he laughs. By the time he arrived at London’s University of Westminster, he had a small, yet compact studio, which completely filled his tiny 4 x 2 metre university room. His first production was a remix of Strike’s Top Five hit ‘U Sure Do’.

Paavo had arrived at the same university from his native Finland, where he had already fallen in love with electronic music and composed music for theatre. Also classically trained on cello and piano, he was studying music business. The two met one beery night in university halls and Jono proceeded to play his latest productions. “I love this kind of music,” Paavo told Jono. “Let’s write a track together.” Jono loved the idea. They pooled their studio resources in one mad taxi dash, and Anjunabeats was born. It is now one of the most famous labels on the world stage.

In 2001, Above & Beyond remixed Madonna’s ‘What It Feels Like For A Girl’ after Tony talked his way into her manager’s office – and into a remix. “We were pitching for the stars at that point,” smiles Paavo. Tony’s charm paid off when Madonna used their mix for her controversial hot rod rampage video, directed by her husband Guy Ritchie. When she phoned, requesting some minor changes, Tony was in flagrante with his girlfriend. He took the call though. Well, if Madonna calls… Other remixes have included Dido’s ‘Sand In My Shoes’ and Britney Spears’s ‘Everytime’.

Their first single proper, 2002’s ‘Far From In Love’ with Kate Cameron, quickly became a dance anthem. In 2006 Above & Beyond released their first artist album ‘Tri-State’ which was greeted with rave reviews. “Brilliant,” said DJ Magazine. “The ultimate fulfillment of any dance act’s ambition.” The sheer quality of the songwriting on this album shone through as it swept from euphoric melodies to atmospheric down-tempo moments. Above & Beyond had most certainly arrived. “Tri-State was our first attempt at writing an album,” says Paavo. “We felt the perfect album wouldn’t be 12 club tracks but a collection of songs that take you on a journey. It took over a year to do it. There were moments where we weren’t really sure. But in the end we feel we made something we could be proud of.”

One of the album’s many standouts is ‘Alone Tonight’ – a song Tony wrote after a relationship break-up. Its otherworldly melodies and heartfelt vocal performance from Richard Bedford resonate with audiences all over the world. “’Alone Tonight’ really does connect with people,” says Jono. “A lot of people who go to clubs are single, and that song is about being in a relationship but feeling alone. So it resonates with both groups of people.” Under their Oceanlab alias, used working with singer/songwriter Justine Suissa, they also produced the unforgettable ‘Satellite’. Again, there’s a lyric with universal appeal – which Tony wrote about Paavo and his Japanese wife, when both were on opposite sides of the world – coupled with melodies to make you shiver and a vocal drenched in emotion. It too has become a vocal trance classic and live favourite. 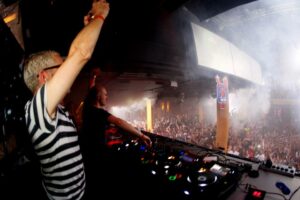 Yet Above & Beyond aren’t just consummate musicians and songwriters, they are also world class DJs. Their Trance Around The World radio show airs on over 120 FM, Internet and Satellite stations worldwide and reaches 20 million listeners. They began their DJing career in grand style in 2002, in front of 8,000 people in Tokyo. Since then they have become globetrotting DJ superstars. In 2004 they won Essential Mix of the Year, proving just how deftly they navigate the full spectrum of melodic dance music, with sets that cross genres with ease and that encompass the trancier side of house, progressive and techno. And each year they rise inexorably higher in the prestigious DJ Magazine poll: from 39, to 19, then down to nine, then six, before reaching their current placing at four. “To be among such great DJs is a real honour,” says Paavo, with a humility typical of the band. “There are people above and below that I really, truly respect.”

What audiences around the world also respond to is the professionalism and enthusiasm that Above & Beyond bring to their art. There is a warmth about the trio that people love. Tony is the one who gives it all on stage. “Tony is really the rock n’ roll star of the whole crew. He’s the guy with the most experience, in life, in many things,” says Paavo, “and he still manages to be the kid of the group.” Tony sums up his band members with equal enthusiasm. “Jono is ambivalent about the incredible talent he has. He has a lot of energy, he is fearless when he’s DJing and is always in a good mood.” If Jono’s contribution is an effortless musicality, says Tony, Paavo adds heart and soul. “What he brings in a sense is how to bring out the emotion in a track.”

The ongoing Above & Beyond world tour continues. And the band have just returned from Ibiza, where, prolific as ever, they have been recording an Oceanlab album with Justine Suissa that is even more widescreen in its vision, says Jono, than ‘Tri-State’. They work instinctively as a team, constantly striving to get better. “You get more out of life by collaborating,” notes Tony. “We’re always trying to grow, we’re always trying to learn and we’re always trying to get better at what we do.” And what they do is make music with melody, movement – and meaning. Music, in short, that matters to people across the globe. “You can do stuff that is popular without selling out,” says Jono. “If you do something of good quality, people respond to that.” Which is why even when they are half a world away, audiences always make Above & Beyond feel at home.