Author of the just-released The Hungry Fan’s Game Day Cookbook and celebrity cook Daina Falk on “Fangating” and three healthy game-day recipes as we head into football season.
When you think of game day eats, the word “healthy” doesn’t quickly come to mind. This I know and wholeheartedly acknowledge. But when I got started in this business, it was after I had lost 60 pounds, was committed to keeping it off, but was not willing to give up my once-a-week cheat day that for me is spent tailgating or homegating, or collectively as I call it, Fangating. So I came up with new, healthier spins on game day favorites that included more nutrient-dense foods, smart substitutions, and overall healthier preparations. The three recipes that follow feature lots of yummy, nutritious veggies; Greek yogurt in lieu of sour cream; sweet potatoes in place of other kinds of potatoes (which lack the same nutrients that sweet potatoes possess); nuts and leaner proteins; and are baked instead of fried. Whether you’re spectating at (or before) a sporting event or refueling after participating yourself, these are tasty, more sensible riffs on the dishes you might have otherwise avoided. Enjoy!

Healthy Chipotle Chicken Potato Skins
Serves 6
Potato skins are a sportsfood staple. But I’ve got to say—and forgive me for sounding whiny—I’ve been served terrible ones so many times. Why are they so hard to make well? I think part of the problem is that, more often than not, people overcook the potatoes. And then once the potatoes get cold—yuck. Of course, I like this recipe for ’tater skins—it’s my own. But I’ve also opted to use sweet potatoes because I think they’re a bit juicier, they’ve got more flavor, and I find them less starchy. They’re also so much more nutritious than regular potatoes. Add my chipotle chicken mixture on top and you’ll hit your protein quota and enjoy every bite—you’ll need a fork and knife for these!
3 medium-sized organic sweet potatoes
1⁄4 cup plus 3 tablespoons extra virgin olive oil
3⁄4 pound boneless, skinless chicken breasts (about 2 small breasts)
1⁄2 teaspoon sea salt and 1⁄2 teaspoon freshly ground black pepper, plus more for seasoning
2 tablespoons fresh lime juice
2 cloves garlic, minced
1 tablespoon minced chipotles in adobo
1 teaspoon dried oregano
1 teaspoon ground cumin
2 teaspoons chili powder
2 cups spinach, wilted (see Tip)
5 ounces sharp white Cheddar cheese, grated
Plain Greek yogurt (see Tip)
Chipotle hot sauce, optional
Cilantro sprigs, roughly chopped
1. Preheat the oven to 350°F.
2. Wash the sweet potatoes, and prick them all over with a fork. Brush the skins with 2 tablespoons of the olive oil. Place in a Pyrex dish or on a baking sheet, and bake them for 50 to 60 minutes or until fork-tender.
3. Place the chicken in a baking dish, rub with 1 tablespoon of the olive oil, and season with a small dash of salt and pepper. Place the chicken in the oven alongside the potatoes, and cook for 25 to 30 minutes, until cooked through. Set aside to cool.
4. Meanwhile, combine the remaining 1⁄4 cup olive oil, lime juice, garlic, chipotle pepper, oregano, cumin, chili powder, and 1⁄2 teaspoon each of the salt and pepper in a medium bowl. Set aside.
5. Once the chicken is cool enough to handle, shred it with a fork or your fingers. Then combine it with the spinach, and keep warm.
6. Cut the sweet potatoes in half lengthwise, and let cool for 5 to 10 minutes more.
7. Increase the oven temperature to 400°F.
8. Using a spoon, scrape out the insides of the potatoes, leaving only the skin and a 1⁄4-inch layer of potato flesh. (Be careful not to tear the skins.) Return the skins to the baking dish, and brush the insides with the chipotle and herb mixture. Bake for 5 to 10 minutes or until crisp.
9. Meanwhile, add the remaining chipotle and herb mix to the spinach and chicken, tossing to combine.
10. Once the skins are done, stuff them with the chicken mixture, top with grated cheese, and bake for another 5 to 10 minutes, until the cheese has melted and the skins are hot and crisp. Serve topped with Greek yogurt, the hot sauce, if desired, and chopped cilantro.
Friendly Fangating Tip
Feel free to wilt your spinach in the microwave by putting it in a bowl with 1 teaspoon water and zapping it for 20-second intervals. I like to substitute Greek yogurt for sour cream. They taste almost exactly the same, but Greek yogurt is much healthier and lower in fat and calories.

“Go for Gold” Chicken and Cashew Lettuce Wraps
Makes 16
Shaun White, America’s most famous snowboarder, has competed in three consecutive Winter Olympic Games. And he’s got two gold medals to show for it. Pretty remarkable if you ask me. Shaun has publicly shared that his favorite cuisine is Chinese, so I created this recipe in homage to the King of Snowboarding. This is a delicious and athlete-approved spin on the classic chicken with cashew stir-fry. I cut down on the fat by using chicken breasts instead of thighs and opted to couch this protein-packed entrée in lettuce, rather than serving it traditionally atop white rice. This way you’ve got an easy and tasty finger food recipe for your fangate.
3 tablespoons vegetable oil
11⁄4 pounds boneless, skinless chicken breasts, chopped into 1⁄4-inch pieces
2 tablespoons cornstarch
1⁄2 teaspoon crushed red pepper flakes
1⁄2 teaspoon sea salt
1⁄4 cup finely chopped green onion bulbs, plus 2 tablespoons thinly sliced green onion tops
1 tablespoon minced garlic
1 tablespoon minced fresh ginger
8 ounces snow peas, ends and threads removed, thinly sliced on the diagonal (about 2 cups)
1 large red bell pepper, julienned (about 1 cup)
1⁄2 red onion, thinly sliced (about 1 cup)
2 stalks celery, peeled and diced
1⁄4 cup chicken stock
1⁄4 cup hoisin sauce
2 tablespoons low-sodium soy sauce
2 tablespoons rice vinegar
1⁄2 cup roasted cashews
Freshly ground black pepper
16 Boston bibb or butter lettuce leaves
1. Heat the oil in a wok or a large skillet over high.
2. Place the chicken, cornstarch, red pepper flakes, and salt in a large zip-top plastic bag, and shake to coat.
3. When the oil is hot, add the chicken, and cook for 5 to 6 minutes, until the chicken turns opaque and is lightly browned. Transfer to a paper towel–lined plate to drain.
4. Reduce the heat to medium-high. Add the green onion bulbs, garlic, ginger, snow peas, red bell peppers, onions, and celery to the wok, and cook for 3 to 4 minutes, stirring often, until tender-crisp. Transfer the vegetables to a plate.
5. Stir together the chicken stock, hoisin sauce, soy sauce, and vinegar in a small bowl. Add to the wok, and stir with a wooden spoon to remove any browned bits from the bottom of the pan. Reduce the heat, and simmer the sauce for 1 to 2 minutes, or until slightly thickened. Return the chicken and veggies to the wok, and toss to coat everything well. Add the green onion tops and roasted cashews, season with pepper, and toss again.
6. Transfer the stir-fry to a serving bowl with a spoon. Serve with the lettuce leaves for wrapping.

Mediterranean Nachos
Makes 1 large plate
I have to admit it—I’m a total nacho fiend. Whether I’m watching the game from the stands or on the couch at home, there are few things I find more satisfying than a plate of crunchy, cheesy nachos. I love playing around with different flavors, which is how I came up with my Mediterranean nachos—a healthier and more interesting riff on the classic dish. Preparing fresh hummus and tzatziki makes all the difference in this awesomely easy snack.
1 (8-ounce) bag baked pita chips
2⁄3 cup thinly sliced romaine lettuce
1⁄2 cup Kalamata olives, chopped
2⁄3 cup diced tomatoes
1⁄2 cup crumbled feta cheese
Hummus
1 (15.5-ounce) can chickpeas
3 tablespoons tahini
4 to 5 ice cubes
Juice of 1 lemon
2 cloves garlic, peeled and crushed
2 tablespoons extra virgin olive oil
Tzatziki
1 cup reduced-fat (2%) plain Greek yogurt
2 cloves garlic, peeled and crushed
Juice of 1 lemon
2 tablespoons extra virgin olive oil
1 sprig dill, finely chopped
1 small cucumber, half minced, half diced
Sea salt and freshly ground black pepper
1. Make the hummus: Drain the chickpeas, and skin them by placing them in a single layer on a paper towel and rubbing gently; the skins will come right off with your fingers. Place in a food processor with the tahini, blend, and then drop in the ice cubes one by one to create a very smooth texture. Transfer to a bowl, and add the juice of 1 lemon, 2 crushed garlic cloves, and 2 tablespoons olive oil. Mix well. If you want a thinner consistency (similar to nacho cheese or refried beans), stir in 1 tablespoon water.
2. Make the tzatziki: Combine the Greek yogurt, 2 crushed garlic cloves, the juice of 1 lemon, and 2 tablespoons olive oil, the dill, minced cucumbers, and salt and pepper to taste in a bowl. Stir thoroughly so all ingredients are evenly incorporated.
3. Lay out the pita chips on a tray or serving plate. Top with 3⁄4 cup of the hummus and 3⁄4 cup of the tzatziki, and sprinkle with the diced cucumbers, lettuce, olives, tomatoes, and feta. Serve immediately with any leftover hummus and tzatziki on the side. 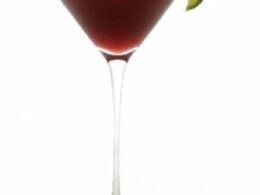 Just because the leftover candy that you will inevitably snack on won’t be very healthy, that doesn’t mean…
byMelissa 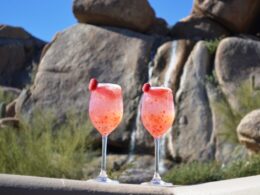 Whether you are celebrating Valentine’s Day with your sweetheart or with friends, toast to the holiday with these…
byMelissa 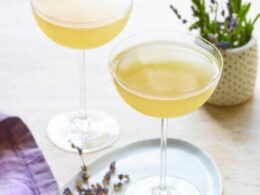 Now that spring has sprung, it is time to put away the bourbon and brandy and bust out…
byMelissa 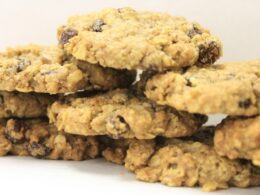