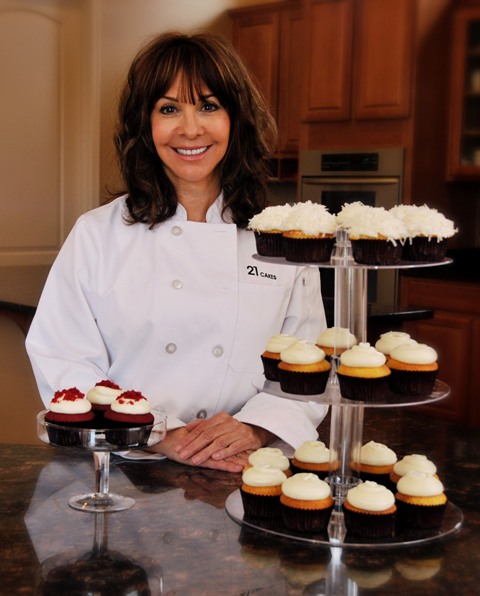 If you ask me, the Valley can never have enough cupcakes. And this summer, a new cupcakery will debut in Scottsdale. Chef Linda Schneider’s 21 Cakes will open at Scottsdale Seville at Indian Bend and Scottsdale Road. With a mother and grandmother who were both talented bakers, a passion for cupcakes has always been a part of Schneider’s life. After she began to receive orders from family and friends, she decided it was time to open up a bakery and the result is 21 Cakes.

While 21 Cakes is named after the Art Deco period, with its color palette of white, soft gray and lavender, communal table and dramatic light fixture, it looks as if straight out of Pairs. “It’s a kind of homage to New York City’s 21 Club and 1930’s Cotton Club Era elegance when people dressed to go out,” Schnieder says. The cupcakery will dish up at least 12 different cupcakes a day using fresh, premium ingredients and recipes that are considered family heirlooms.

Flavors that patons can expect include almond, red velvet, chocolate cheesecake, salted caramel and more. Petite Cakes for two will also be on the menu as well as Belgian cupcakes, a Belgian waffle-like experience with fresh fruit compote served on top of a cupcake and a dollop of freshly made whipped cream. For true cupcake enthusiasts, 21 Cakes will offer a special breakfast cupcake, a cinnamon sugar cupcake without frosting (similar to coffee cake). Patrons also also invited to stop by for locally roasted coffee and cupcake gift packs. 480.699.6220, http://www.21cakes.com/.