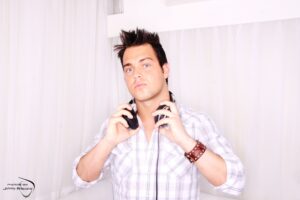 Loud, Crazy, Intense and Exhilarating , Dj Thomas James Signature style can be described as a full on electro assault. Specializing in electro house, progressive and electro remixes. The key to his uniqe sound is his mastery of effects. Using over 50 unique audio effects Thomas James is able to take a song you may know and inject an intense energy into it. Effects also provide for clean and creative transitions so the music is always smooth. At only 24, Thomas James has already been named the Hottest Dj in the Valley by the Arizona Republic Magazine as well as AZNIA Best EDM Dj for the State of Arizona.

Thomas James also possesses exceptional promotional and marketing abilities. His promotion “One Night Affair” lasted for 2 years at PCL nightclub in Scottsdale, becoming a monthly must for Valley House Heads, attracting acts such as Dj Tranzit, Dj Scotty Boy, and Trumpeter Rico De Largo. After that Thomas James was Resident Dj of the hottest Thursday in town for 2 years “Thursday Baby Thursdays” at Jackrabbit Lounge. Thomas James has also played huge festivals such as Dayglow with 2000 people, The Colossal Event with 6000 people, and The Lupe Fiasco Concert at the Mesa Ampatheater which drew 5000 people.

Thomas James holds sponsorships with NOHO Drink and Remix watches, both huge up and coming brands. Thomas James’ residency at El Hefe Sundays have taken Scottsdale by storm. Selling out every week, Sundays at El Hefe are the craziest party in town and show no signs of slowing down, and neither does DJ Thomas James.