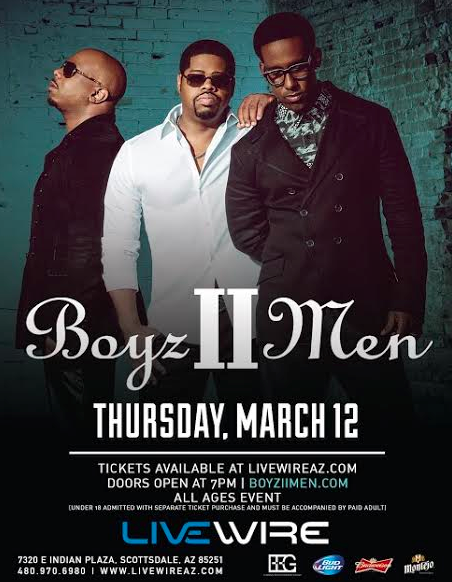 Livewire announces iconic R&B group, Boyz II Men, will perform at Livewire on Thursday, March 12. Doors open at 7 p.m. The event is all ages, under 18 admitted with separate ticket purchased and must be accompanied by paid adult. Tickets on sale now at Livewireaz.com.

Nathan Morris, Wanya Morris and Shawn Stockman, better known collectively as Boyz II Men, have been making music together for more than 20 years. Over the past two decades, the trio has composed and performed some of the most celebrated classics. With four Grammy Awards, nine American Music Awards, nine Soul Train Awards, three Billboard Awards and a 2011 Music of Black Origin (MOBO) Award for Outstanding Contribution to music, Boyz II Men have redefined popular R&B.

Boyz II Men has sold a remarkable 60 million albums and holds the distinction of being the best-selling R&B group of all time. Their extensive repertoire, comprised of smooth harmonies and enduring themes continues to grow as they craft new albums and bring their legendary act to stages across the world. Boyz II Men’s past chart-topping hits include: “End of the Road,” “I’ll Make Love to You,” “One Sweet Day,” “Motownphilly” and many more.

When their track “On Bended Knee” took the No. 1 spot away from “I’ll Make Love To You” in 1994, Boyz II Men became only the third artist ever (after The Beatles and Elvis) to replace themselves at the top of the Billboard Hot 100. In October of 2014, the group released their eleventh studio album “Collide” which reached No. 5 on Billboard’s Independent Albums chart. Boyz II Men currently maintains a residency at the famed Las Vegas hotel The Mirage and continues to perform worldwide as a trio.