It comes as no surprise that Duchess Kate Middleton, who is known for mixing high-low designer baubles with affordable staples, has snagged the top spot, marking her third time on the coveted style list. The Duchess has also been lauded with bringing about the international recognition of British designers like Alexander McQueen, Alice Temperley and Matthew Williamson.

Meanwhile, actress and cover star runner-up Jessica Chastain, who has head-turned in the likes of Balenciaga, Alexander McQueen and Elie Saab this year, is photographed on the cover of subscriber issues. 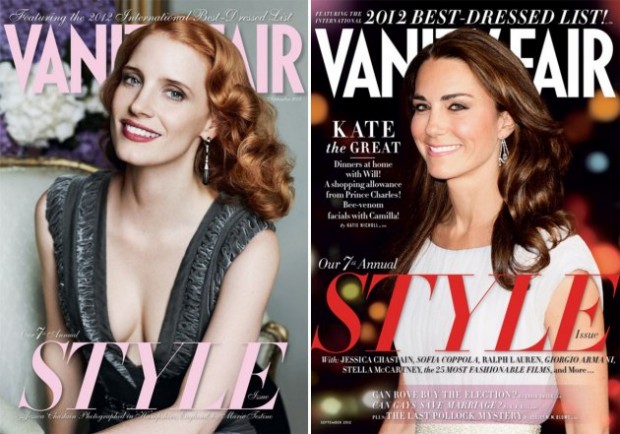 Other notables who made the list include Crown Princess Mary of Denmark, Princess Alexandra of Greece and Monaco “royal” Charlotte Casiraghi as well as Elettra Wiedemann, Diane Kruger, Poppy Delevigne, Léa Seydoux and more fashion types.

For the boys, Jay-Z and Tom Brady grabbed mentions, though their fashionable wives (Beyonce and Gisele, respectively) surprisingly missed the cut.

Some other surprising misses were actresses Marion Cotillard, Keira Knightley and Cate Blanchett.

Check out who else made the cut here. Or see it in Vanity Fair’s September issue.

What do you think about this year’s Best-Dressed list? Would you add/change anything?