Sometimes, all it takes is the right makeup, angle and lighting to craft toned arms and six-pack abs.

For more than 11 years, Andrew Dixon has worked as a certified trainer and has seen and heard about every next hot diet and new fitness plan under the sun.

Dixon realized that a lot of before and after photos, or transformation photos, that are seen marketing the next big diet or exercise program are often deceiving and manipulated through tools like Photoshop or pro tan to portray false results in a short amount of time.

Dixon decided to test things out for himself, penning a poignant article in the Huffington Post based on a series of fitness transformation photos he took of himself that were manipulated to look like he had undergone months of dedicated diet and exercise.

“Long-lasting results take years of consistency, hard work and dedication,” Dixon writes. “Results that happen quickly are often temporary, and this is another factor that needs to be taken into account when looking at these transformations. Did the individual cut calories to starvation levels or cut out entire food groups to reach a very low body fat percentage for the photo shoot, only to rebound a few days or weeks later?” 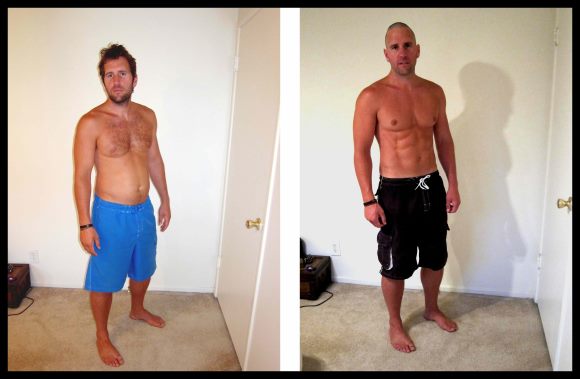 In his first photo, Dixon said he weighed around 185 pounds at 16 percent body fat, and that he felt “particularly bloated that day.” Only an hour later, Dixon shaved his head, face and chest, did a few pushups and chin-ups, and tweaked his bedroom lighting so that it would reflect off his sucked in stomach and flexed abs for the second shot.

Just a few weeks later, he snapped a few more shots at 200 pounds and 19 percent body fat in just under an hour.

While he admits that there are truly genuine representations of amazing health and fitness transformations out there, Dixon cautions against comparing yourself to transformation photos, and advises people to concentrate on a healthy lifestyle of balanced eating and exercise that’s right for them.

“We all spend too much time sucking in our guts, trying to look the way we think society thinks we should,” he said. “Don’t waste any more energy trying to compete with everyone else. It’s all smoke and mirrors.”